The MINI Roadster has joined our fleet, and the open-top two-seater promises to lift our autumnal gloom 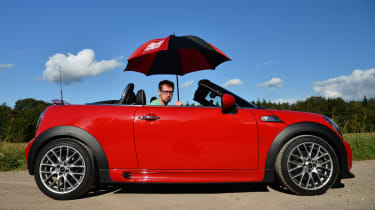 With autumn in full swing and winter just around the corner, perhaps this isn’t the best time to take delivery of an open-topped car. Yet the MINI Roadster promises to be a ray of sunshine in the gloomy weather, thanks to its agile handling and cheeky character.

I’m even coming to terms with the car’s stubby looks – which are helped by the bright Chili Red paint and contrasting black stripes and canvas roof on our model. To my eyes, the Roadster looks better with its roof stowed. This leaves nothing between you and the elements but a chopped-down windscreen, which is more steeply raked than the standard convertible’s screen, as well as a pair of roll hoops.

Although our car is the standard Cooper S Roadster, it looks similar to the range-topping John Cooper Works model, thanks to the Sport pack. This £1,865 option adds 17-inch alloy wheels, which look as if they’ve been taken straight from a MINI Challenge racer. It also includes a JCW aerodynamic kit, comprising some branded door guards and a massive chin spoiler of which Bruce Forsyth would be proud. This protruding front bumper only crunches over the biggest speed bumps.

By far the best feature is the Sport button. It makes the steering a little bit heavier, but the pay-off is that the exhaust burps, pops and gurgles on the overrun. Driving under bridges or in the Auto Express car park has never been so noisy – and it sounds even better if you drop the roof. Pull and twist the handle above the rear view mirror, then press a toggle switch, and the hood whirrs out of the way behind the seats in around 10 seconds.

Performance is great, too. The 181bhp 1.6-litre turbo petrol engine rasps away under the bonnet, offering more than enough ways to get the wind ruffling your hair.

I drove the car to the recent launch of the Hyundai Veloster Turbo, and although the MINI’s engine has 3bhp less than the new Coupe’s, it provides much stronger performance. In fact, I doubt you’d ever really need the extra pace of the top-of-the-range JCW model.

Under the skin, the Roadster is basically the same car as the MINI Convertible, with two fewer seats, but I’ve been impressed by the size of the boot. Even with the roof stowed, there’s plenty of space – 240 litres to be exact – to dump the stuff that would normally go on the back seats of the four-seater car. The ski hatch is useful, too, if the Olympics have inspired you to take up the javelin or pole vault.

There are still some compromises involved in running an open-top MINI, though. For starters, the interior is always freezing on a cold day, plus the Roadster is noisier than a hard-top car and the wind deflector and pop-up rear wing hamper your vision out of the rear view mirror.

Nevertheless, the Roadster is great fun, especially when the sun comes out and you drop the top. With a bit of luck it’ll be the ideal antidote to the winter blues.