If the standard car isn’t enough fun for you, the MINI JCW Roadster has 208bhp and even more thrilling performance and handling 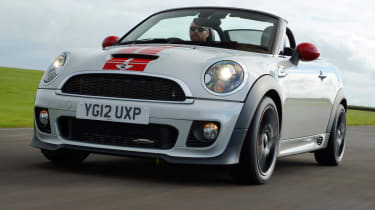 The MINI JCW Roadster is the flagship of the company’s open-top two-seater range, and an exciting rival to the Mazda MX-5, and even the Audi TT. The John Cooper Works features all the usual MINI design hallmarks, with those large headlights dominating a familiar front end, but the JCW Roadster stands out with its wide body kit, coloured wing mirrors and unique honeycomb grille. The windscreen is more steeply raked than on the MINI Convertible, too, and this hints at the car’s sporting intent. Featuring a tuned version of the familiar 1.6-litre turbo engine with 208bhp – the same as in the JCW hatch, Convertible and Clubman – this is the fastest drop-top that MINI makes with 0-62mph dealt with in just 6.5 seconds and a 149mph top speed capability. The suspension is stiffer than the standard car and the racy red and black interior hints at its performance potential - however it also commands a heavy premium over the Cooper S and will be the most expensive Roadster to run every day.

Take the standard car’s thrilling driving experience, turn it up a few notches and you have the JCW Roadster. Driver and passenger sit low in the two-seater, and rear visibility could be better – with the roof in place it’s poor. The ride is quite firm and the cabin becomes noisy at speed, but on the right road the JCW Roadster is brilliant fun. The car has instant responses and grippy handling, helped by the standard electronic differential. The turbo engine crackles and pops to add to the drama – it sounds even better when you press the Sport button and drop the roof – and it delivers on its performance promise, with 0-62mph taking only 6.5 seconds. However it has a tendency to over power its front wheels in the lower gears and torque steer is also an issue.

The JCW Roadster is expensive to buy, especially when you compare it with the great-value, rear-wheel-drive Mazda MX-5. It commands a hefty price premium over the Cooper S too and luxuries like leather trim, climate control and even Bluetooth connectivity aren’t included in the asking price. It obviously won’t be as cheap to run as lesser versions of the MINI Roadster, either, although its 41.5mpg economy and 169g/km CO2 emissions are impressive considering the performance on tap. MINI’s usual suite of eco tweaks, including stop-start, are responsible for this. The brilliant value tlc pre-paid servicing pack takes the sting out of ownership costs further, while the JCW Roadster will also resist depreciation well, like any MINI.

The chrome-trimmed radiator grille and smooth lines ensure the MINI JCW Roadster can immediately be identified as a member of the MINI family. But that’s where the similarities end on the outside. With its flat rear deck and distinctively shaped fabric roof, the car stands out as different. It shares the same bonnet air-scoop as the Cooper S but John Cooper Works badges in the grille and the wider more aggressive front bumpers and side sills give it a more aggressive look. This meaner profile is enhanced by the JCW model’s 17-inch black alloy wheels, as well as the rear spoiler which is automatically raised once you reach 50mph. The interior is standard MINI fare, mixing retro looks and quality materials, but the JCW Roadser is marked out by its bespoke black, red and grey colour scheme, suede trimmed steering wheel and standard sport button.

Buyers don’t choose a car in this class for its ability to carry loads, but the JCW Roadster is surprisingly practical. As it’s a strict two-seater, designers were able to increase the size of the boot – it swallows 240 litres of luggage, and is boosted by a load-through facility. Plus, this capacity isn’t affected when you fold the roof, as the semi-automatic mechanism folds the fabric hood down behind the cabin, where it sits on top of the rear deck. Getting the top down takes less than ten seconds and can be done at speeds up to 20mph - which is handy for when you get caught out by a sudden downpour. The Roadster has a reasonable amount of cubby space, and while rear visibility is poor, acoustic parking sensors come as standard.

The JCW Roadster hasn’t been crash tested by Euro NCAP yet but the standard MINI hatchback was awarded five stars for occupant protection and because it uses essentially the same chassis the Roadster should be just as safe. Stability control is included, as are traction control and electronic brakeforce distribution, while the electronic differential that’s also standard on the JCW model keeps the car in line through corners by gently braking the wheel with the least grip. Build quality is impressive throughout, as in any MINI, although the company’s cars don’t have a flawless record for reliability. MINI came a disappointing 21st in the manufacturer ranking of our Driver Power 2012 satisfaction survey.