MINI is a big deal in the States, so we see how the US-spec Roadster compares to our own Cooper S model 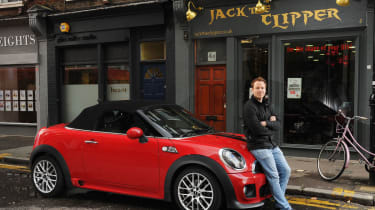 If you really want to get to know a car, it’s no good staying within the confines of the city: you need to pack your bags and take it on a road trip. America is the perfect place to enjoy the open road, with its wide highways, outstanding natural beauty and sprawling states – which is why we decided to take our MINI Roadster on a 266-mile journey of discovery from Los Angeles to Las Vegas.

OK, so it wasn’t actually our MINI we were driving – that was parked up in the long-stay car park at Heathrow as we took the wheel of a US-spec loan car. And it turned even more heads than our Roadster does at home, thanks to the not-so-subtle graphics along the flanks. But once we’d climbed aboard, and got used to the steering wheel being on the ‘wrong’ side, we could have been driving the Cooper S we’ve been nipping around in every day here.

As a brand, MINI is going from strength to strength in the US, as buyers across the pond look to downsize. In 2012, it sold 66,123 cars – a 15 per cent increase on 2011 – and there’s definitely more to come, especially as order books for the new MINI Paceman are now open, and the all-new MINI hatch arrives later in the year.

Our US road trip was a greater test for the Roadster than you might expect. Thankfully, because it’s a two-seater it has a decent boot, so there was plenty of room for luggage. But you’d think twice about doing this trip in the MINI Convertible, as you’d have to put some of your baggage on the back seats, in plain sight when the top is down.

As with the entire MINI range, the Roadster has been designed to be nippy and agile around town, not to cover endless miles on arrow-straight roads. And its compact dimensions seemed totally out of place among the sea of pick-up trucks and SUVs that clogged LA’s congested freeways. It’s on trips like this that the US automotive stereotype of a big, torquey V8, soggy suspension and comfortable seats starts to make sense.

On the few twisty stretches of California highway we encountered as we headed out of Los Angeles, the Roadster showed its strengths. Just like our long-termer, the MINI changed direction quickly, felt alert and produced an addictive rasp from its twin exhausts that encouraged us to blip the throttle at every opportunity.

But once we hit the freeway pointing straight into the Nevada desert – and all the way to Las Vegas – the Roadster’s main flaw was highlighted: a lack of refinement. Even with the roof up, wind, road and engine noise all combined to make talking to our passenger difficult at a freeway-friendly 65mph, while huge US lorries only added to the din as they thundered past. Pulling up at a set of traffic lights, we could hear conversations going on in the cars around us, too.

This is something we’ve encountered in the UK as well, especially over the Christmas holidays, when the wet weather meant the roof stayed firmly in place. It kept us warm and dry, but with so much noise filtering through the fabric, we felt constantly exposed. Some people would say that’s the price you pay for buying a convertible, but rivals such as the Audi TT and Mazda MX-5 are far better insulated and don’t suffer nearly as badly.

As we were in the sunny south-western states, the roof of our US-spec MINI didn’t stay in place for long. And while temperatures dropped from the comfortable mid-twenties in LA to the brisk mid-teens by the time we arrived in Vegas, the Roadster’s climate control and heated seats meant we stayed comfortable as the desert sun shone.

Once we arrived in Sin City the MINI came into its own again, getting waves and thumbs-up wherever we went. That could have had something to do with the enormous Stars and Stripes stickers plastered down the sides – but we prefer to think it was the Americans showing their approval for our plucky little British-built car.

“Engage the Sport mode, and the MINI’s exhaust note is hugely addictive. The pop and bang will have you lowering the roof at any opportunity – even in the current freezing weather. Plus, the heated seats are amazingly effective, so you’ve got no excuse.”Richard Ingram, Online writer

“The Roadster looks like a MINI-ised version of the MGF to me. That fabric folding roof is virtually identical.”Gordon Mallett, via autoexpress.co.uk

“It’s a good car, but does the MINI really need £7,000 worth of extras? That’s crazy.”Russ, via autoexpress.co.uk