The new Mitsubishi Colt is everything its predecessor wasn't - stylish, great to drive and desirable. 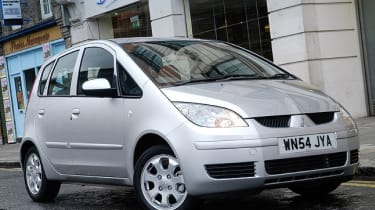 To be competitive in this sector, Mitsubishi needed a strong diesel contender. Now it has one. The Colt offers superb performance, economy and practicality at a reasonable price. All this, along with a fun driving experience, further strengthens the Japanese baby's case as one of the best superminis of the current crop.

The new Mitsubishi Colt is everything its predecessor wasn't - stylish, great to drive and desirable. Up to now, our only criticism was the lack of a diesel option - but now the Japanese company has addressed the issue with the introduction of the new 1.5-litre DI-D engine.

The oil-burner has come from the Colt's sibling, the Smart ForFour, and Mitsubishi has been wise to adopt it. The 1.5-litre three-cylinder is a gutsy performer, with 95bhp and 210Nm of torque. That's nearly 50 per cent more pulling power than the 1.5 petrol Colt, and on the road you can really feel it.

The Mitsubishi surges briskly from a standstill with a respectable 0-60mph sprint time of 11 seconds. But it's the in-gear acceleration that impresses, with strong performance in any of its five ratios. As with most small diesels, the car is fairly noisy at start-up. But once the engine is warm, it's very refined.

There's little in the way of vibration through the cabin at idle, and on the move engine noise is kept under control. Press on and the Colt does become more vocal, but if anything, the three-cylinder roar is quite sporty.

Inside, the controls are well placed and easy to use. While the steering is quite light, it's quick and precise, and the gearchange is positive. A six-speed semi-auto transmission is also available, and this will prove popular with drivers who spend most of their time in town.

On the open road, the Colt is fun to thread through twisty lanes. For the most part, the suspension copes adequately, but although the ride is firm, there is some body roll in tighter corners, while it can be a little harsh over some of the poorer, broken tarmac the UK has to offer. On coarse surfaces, the Colt transmits some road noise, but there is little wind or engine intrusion at cruising speeds.

It may not look as radical as some European competitors, but the Mitsubishi's MPV styling is sharp and functional. Practicality is key for this car, and there's plenty of interior stowage, while the sliding, folding, removable rear seat allows owners to choose between more legroom or greater boot space.

The new diesel engine helps, too - combined economy of 61.4mpg is one of the best figures in this class. Matched to good standard safety and equipment levels, the Colt 1.5 D-ID makes for a very tempting proposition.