Forget the Lancer Evo X... when it comes to new Mitsubishis, they don't get much more important than this: the L200 Double Cab 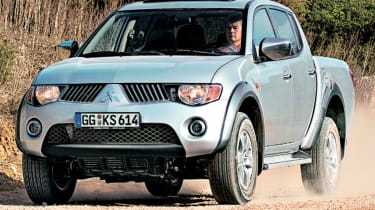 Mitsubishi knows a thing or two about pick-ups, and the new L200 is a step forward in all areas. The engine is more powerful, the interior is of a higher quality and with updated suspension the pick-up should be capable on and off-road. The looks may put some people off, but it's well built, and has lots of space and equipment.

Forget the Lancer Evo X... when it comes to new Mitsubishis, they don't get much more important than this: the L200 Double Cab. In recent years, the pick-up has been by far the best-selling vehicle in the Japanese firm's line-up, and the most popular machine of its type in the UK, accounting for a third of total sales.

To say the car has a lot to live up to is an understatement. And it has a tough brief. Not only must the new L200 offer a driving experience and interior more palatable to an increasing number of migrating SUV drivers, but it also needs to appeal to its traditional base of builders and farmers.

With dramatic styling derived from Mitsubishi's Pajero Evolution Dakar rally car, the newcomer certainly raises eyebrows. But the exterior changes are only one part of a comprehensive update.

Under the skin, the truck continues with leaf spring rear suspension, but up front there's a new double wishbone and coils arrangement - all of which should mean SUV-like on-road handling and a more comfortable ride than ever before. Load space is virtually unchanged, with a 1.32-metre-long rear bay, but the quality of the interior has improved greatly. The confident design of the exterior is carried over to the inside, with rotary dials, stalks and switches that all feel well made. Only some tough plastics reveal that this is primarily a working vehicle.

Tipped to be the most popular model in the range, the Double Cab Warrior version we drove weighs in at around £19,750. It comes with full seating for three in the back and a generous list of equipment, including climate control, a CD stereo with MP3-playing ability, power windows and electric-opening rear cab glass. That compares well with Nissan's £20,110 Navara Double Cab SE. Something else to consider, though, is tax. If you're using a pick-up as a company car, the amount you pay is based on a percentage (according to your earnings) of a £500 flat rate. From 1 April 2007, this will jump to £3,000 - although your monthly bill will still be cheaper than it would if you ran a Ford Mondeo on the CO2-based system.

On the evidence of our brief first drive, the L200 is a vast improvement on its predecessor. We'll have to reserve our final verdict until we've carried out a full road test, but Mitsubishi looks to have another winner on its hands.