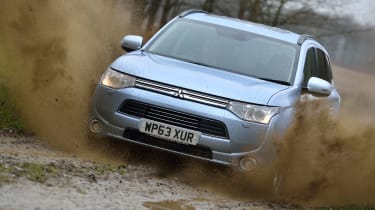 SUV owners – and company car users in particular – can save serious cash with the Outlander PHEV, especially if they don’t drive mega miles. That’ll make rival plug-in hybrid manufacturers sit up, take notice and, hopefully, react. There’s plenty of space and kit on offer, too. The only shame is that the Outlander isn’t more engaging to drive or better quality.

Once in a while a game-changer comes along – a car that proves a hit with buyers and makes rivals rush to copy the concept. The Mitsubishi Outlander PHEV is one of those cars.

On the face of it, it’s a pretty good plug-in hybrid based on a pretty average SUV. But Mitsubishi has chosen to break with tradition and price this PHEV model exactly the same as its diesel equivalent.

For that you get a stylish SUV with a good-sized boot (436 litres) and plenty of space for five, at a price that’s the same as an Outlander diesel auto.

But while the diesel claims 48.7mpg, the PHEV claims 148mpg. Even Mitsubishi will tell you that’s unlikely, but we still managed an impressive 92mpg. If you plug in regularly and do less than the 32-mile electric range each day, you’ll barely see a filling station.

The savings don’t stop there – with emissions of 44g/km you’ll save thousands on company car tax compared to diesel SUVs, the road fund licence is free and there’s no Congestion Charge to drive into London.

The only compromises when driving are due to the Outlander’s dynamics. Whether on EV or petrol power or any combination of the two, performance is smooth if not scintillating.

The ride is a bit too firm for our liking, but there’s the reassurance of four-wheel drive for light off-roading or to help with towing.

With good visibility, light controls and decent practicality, the PHEV is an easy car to live with.

You’ll need a PhD to understand the infotainment system, though, and the quality inside is a bit of a letdown. But when you’re saving so much cash, there’s more to like than not.