One-off Nissan, called the GT-R/C has been tearing around Silverstone at speeds up to 131mph – controlled by a PlayStation remote 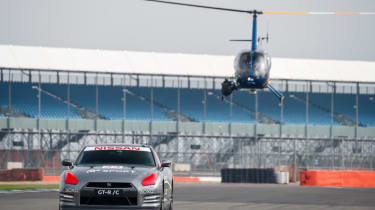 As part of the release of the latest Gran Turismo game, Nissan and JLB Design Ltd. have teamed up to created the ultimate toy: a Nissan GT-R (named the GTR/C) controlled wirelessly by a PlayStation remote.

As well as going straight to the top of every 12-year old boy’s christmas list, the Japanese supercar puts 542bhp and 636Nm of torque at the fingertips of anyone who wields the plastic remote. These figures mean the 3.8-litre V6 under the bonnet will fire the car from a standstill to 62mph in a claimed 2.8s and if you keep you thumbs pinned, on to a top speed of 196mph. Saying that, if you are doing those speeds with the remote you will want to invest in a helicopter, as the controller’s range is just one kilometer.

To bring the GTR/C from concept to reality, UK firm JLB Design Ltd. fitted the car with four robots which use the signals from the controller to adjust the throttle, steering, transmission, and, importantly, brakes at a rate of 100 times a second.

In addition to this, and to prevent the one and only GTR/C suffering PlayStation style crashes, it has been fitted with two independent safety systems which can applied if the driver has gone more Grand Theft Auto, than Gran Turismo. The first of which can jam on the brakes, and the second can shut off the engine.

Controlling the car during its promotional video was Jann Mardenborough, who won Nissan’s GT Academy, which scours the globe for the best Gran Turismo drivers and puts them behind the wheel of real racing cars.

His fastest lap was 1:17:47, which is not a million miles away from old fashioned times posted by the likes of the Porsche Cayman GT4 and Caterham Superlight R when there was an driver actually in the cockpit.

While this is merely a Nissan publicity stunt, seeing the GTR/C work in real life makes you wonder if there is potential for a giant remote control race series - one which takes a much more relaxed approach to contact during the race…

What do you think about the GTR/C? Let us know in the comments below...