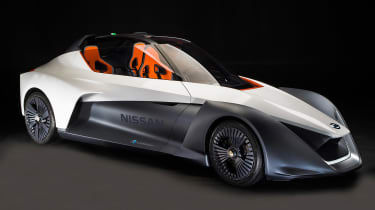 Nissan has provided a further hint that it could produce a radical electric sports car by unveiling a new development of its Bladeglider concept.

A pair of new Nissan Bladeglider show cars are being displayed in two configurations at an event in Brazil to mark the start of the Rio Olympic Games. They mark a clear evolution from the original Bladeglider, which made its debut at the Tokyo Motor Show in 2013, by including a fully electric powertrain and a more realistic cabin - although the radical three-seat layout remains.

Nissan says the new Bladeglider is “an exciting, real-life study into the potential of advanced EV performance”. The car is fully electric, with a powertrain developed by Nissan’s partner for the project, Didcot-based Williams Advanced Engineering. The Bladeglider has a 220kW lithium-ion battery, supplying electricity to a pair of 130kW electric motors - one on each of the rear wheels. 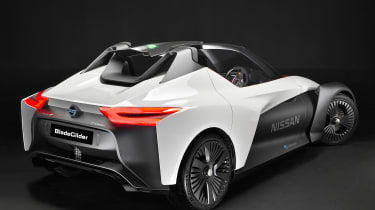 The entire vehicle is 4,300mm long - so slightly shorter than a Ford Focus. It’s slightly wider than that family hatch too, at 1,850mm, but the Bladeglider’s roofline sits more than 15 centimetres lower than the Ford’s, at just 1,300mm.

The Bladeglider is not particularly light, at 1,300kg - around the same as a pure-electric BMW i3. Williams Advanced Engineering is said to have recorded performance figures for the new Nissan, posting a top speed “in excess of 190km/h (118mph)” and a 0-62mph time of “less than five seconds”.

Inside, the evolved Bladeglider gets more functional fabric seats than its predecessor, and a revised dashboard layout that mixes four screens - one at either side of the facia, one in the centre and one mounted within the steering wheel itself. The wheel contains a rotary controller, similar to Ferrari’s Mannetino, which appears to select Neutral, Reverse or a couple of Drive modes. Nissan has revealed that the Bladeglider’s torque vectoring system - which can send torque to the outside wheel to prevent understeering in corners - will have three settings: off, agile and ‘drift mode’.

Will there be a Bladeglider production car?

The new concept is likely to reignite speculation that Nissan is considering building a production version of the Bladeglider - not least because in official correspondence about the new vehicles, Nissan refers to them as “working protoypes” instead of pure concepts. When the original car made its debut, Nissan’s then-vice-president Andy Palmer revealed that he’d driven a test mule for the car based on an Ariel Atom.

Following Palmer’s departure to Aston Martin, and the abandonment of a Nissan Le Mans project that used the Bladeglider’s radically narrow front track, senior Nissan figures were much cooler on the prospect of the concept making production and it seems the Bladeglider is more of a toe in the water. 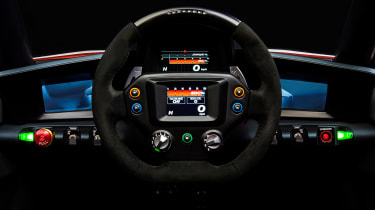 Nissan’s global head of marketing and brand strategy Roel de Vries insisted that the Bladeglider is not earmarked for production in the short term - but admitted the firm was hoping to use the new prototypes to learn more about potential market demand for an electric sports car.

“We have to be clear: Bladeglider is not going to end up in production within the next two or three years,” he said. “However, it is a definite step on from the original concept, in that a concept doesn’t have to consider the practicalities of manufacturing or the technologies involved. By working with Williams and developing these working prototypes, we’ve been able to test the technology and also see how close we could keep the design to the original idea.

“Nissan is committed to EVs making up a large part of its model range and alongside another Leaf, we are looking at where we can add more electric cars to our line-up. The next step would be to have them in another volume sector, which probably isn’t sports cars. But there is an EV image to consider here too.”

Would you like to see the Nissan Bladeglider make production? Let us know in the comments...