Nissan has pulled the covers off the first production-ready GT-R50, which celebrates the golden anniversary of the GT-R badge 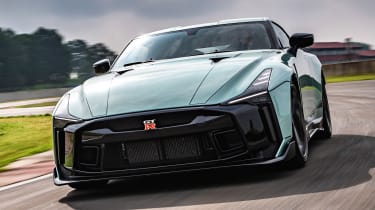 Nissan has revealed the first production-ready version of the new GT-R50 by Italdesign at the Tazio Nuvolari Circuit in Italy. It’s a tuned and rebodied version of the sixth-generation GT-R sports car, built to honour the 50th anniversary of the GT-R nameplate.

Production is limited to just 50 units, with each example carrying a price-tag of  €990,000 (around £883,000) – although Nissan has already allocated most of its build slots. First deliveries are scheduled to arrive between the end of the year and early 2021.

To make the Italdesign created GT-R50 stand out, cosmetic modifications over the standard Nissan GT-R are very extensive. Italdesign has fitted a lowered roof, a reshaped front splitter, fresh LED headlights, a new rear wing, a redesigned rear diffuser and a large power-bulge in the bonnet.

Inside, the GT-R50’s interior is largely shared with the standard GT-R, although buyers do get a carbon fibre dashboard and centre console, a new Alcantara steering wheel and a fresh pair of sports seats, trimmed in Alcantara and leather.

Nissan also says each example can be tailored to each buyer’s unique specification. There’s an assortment of interior trim and paint colours for customers to choose from, as well as a unique racing livery, inspired by Nissan’s most famous race-bred GT-Rs.

Like the standard GT-R, the GT-R50 is powered by a twin-turbocharged 3.8-litre V6. However, the engine has been fettled by Nissan’s in-house tuning company, NISMO, to feature larger turbos, larger intercoolers, new fuel injectors, uprated pistons and a new exhaust system – for a maximum output of 710bhp and 780Nm of torque.

What are your thoughts on the limited edition Nissan GT-R50 by Italdesign? Let us know in the comments below...

From the McLaren 570S to Mazda MX-5, these are the 10 sports cars that we think are the best on sale
Visit Nissan GT-R NISMO receives the Lego treatment 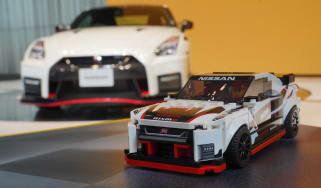 Lego and Nissan team up to pay tribute to the most extreme, most capable GT-R in history...
Visit New 2020 Nissan GT-R: pricing announced 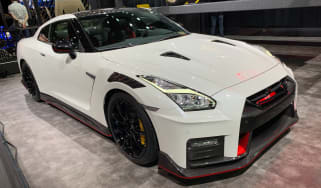 The updated Nissan GT-R is available to order now, priced from £83,995 for the entry-level version and rising to £174,995 for the NISMO