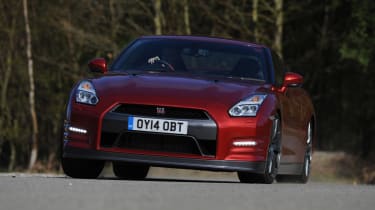 The Nissan GT-R is a genuine technological tour de force, and its advanced Electronic Stability Control system and adaptive dampers can be configured to suit road and track driving. In the most extreme R setting, the Nissan demonstrates remarkable agility and can rip along twisting back roads at barely believable speed. Even so, the GT-R can’t defy the laws of physics and you’re constantly aware of the car’s hefty weight.

Revisions to the suspension have resulted in a softer ride around town, while low-speed steering assistance has been increased in a bid to improve manoeuvrability. Factor in the extra sound deadening, and the GT-R is now more civilised for day-to-day use – but it's not perfect. Along with that all-wheel-drive system that clunks and groans at low speed, there’s plenty of tyre roar on the motorway due to the huge, low-profile tyres.

The Track Edition, with its Nismo-sourced suspension, makes a marked step up over the already extremely capable GT-R; and, on a track at least, it takes only one corner to realise how much more speed you can carry thanks to the extra stability and stiffness the suspension brings. The Track Edition makes the normal car feel a little soft in comparison, and is reassuringly planted, with unrivalled mechanical grip, resulting in a greater sense of precision through the steering wheel, encouraging you to push on. Fine if you're a track day regular, but we suspect it may be feel rather firm over the rough and rutted UK tarmac on our roads.

And, then there's the full-fat GT-R Nismo... Thanks to its stiffer springs and Bilstein dampers, revised suspension geometry and hip-hugging Recaro seats, the driving experience of this even more focused version is far more extreme and less comfortable than the standard car. As a result, the Nismo always feels more at home on a race track than a road, but that's no real surprise, as it was developed specifically to lap the Nurburgring Nordschleife as quickly as possible, achieving a bonkers lap time of 7 minutes 8.69 seconds.

Away from the track – if you can face it – the Nismo is no less than one of the fastest road cars we are likely to drive. As well as having that extra power, a strict diet of carbon fibre has reduced the weight of the car by 30kg, and Nissan has made a huge step forward in aerodynamics: the Nismo produces an extra 100kg of downforce in corners, gluing it to the road in a manner that regular GT-R drivers would struggle to fathom.

There's precious little in the way of ride comfort, but the Nismo's main purpose is to deliver scorching thrills on the road with massive dynamic ability, and it achieves that aim with miles of room to spare. The noise emanating from the exhaust is notably louder and more exciting than the standard car’s, and the straight-line performance certainly feels stronger, too. 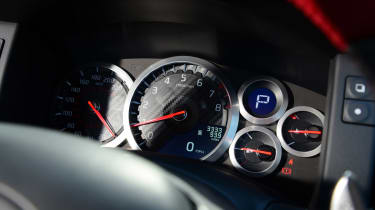 The car's 3.8-litre twin-turbo V6 engine delivers 562bhp with 637Nm of torque, and launch control helps the GT-R blast from 0-62mph in just 2.7 seconds. However, the car's electronics restrict its use, and after doing two full-bore launches, launch mode is disabled for an hour to let the car's drivetrain recover - that's not something that you need to do in a launch control-equipped Porsche 911, for example.

Acceleration is brutal thanks to the GT-R’s excellent four-wheel-drive transmission and six-speed twin-clutch gearbox. The paddleshift set-up provides seamless power delivery and super-smooth gearchanges – it can even be used as a full auto, where it’ll shuffle gears around smoothly and without fuss.

The only slight gripe with the transmission is the grumbling noises it produces when manoeuvring at low speed. It doesn’t sound too healthy, as the diffs chunter and whine, but reliability is good and this little quirk only adds to the GT-R’s focused personality.