We drive a Nissan Juke with a difference, featuring the 485bhp V6 engine from the Nissan GT-R 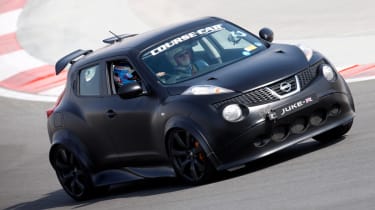 Nissan is a brand that likes to have fun with its products, and the pair of Juke-Rs are perhaps the ultimate expression of this willingness to push the limits. Sacrificing a couple of GT-Rs might seem wrong to some people, but the end result is something truly fabulous. There’s no chance of the Juke-R being anything more than a marketing exercise, but with a new high-performance Juke NISMO set for launch this year it’s clear Nissan has other quick crossovers such as the MINI Cooper S Countryman firmly in its sights.

Advertisement - Article continues below
It’s the ultimate crossover – the body of an incredibly popular small SUV with the mechanicals of one of the world’s fastest and most technically advanced supercars.
The chances are you’ve probably seen the Juke-R before. At least that’s what the marketing people at Nissan are hoping, for this cartoonish creation’s whole reason for being is to generate publicity. And lots of it.
Video: watch the Juke-R taking part in a supercar street race in Dubai
[[{"type":"media","view_mode":"content_narrow","fid":"69350","attributes":{"alt":"","class":"media-image"}}]]
It's the brainchild of the creative sorts at Nissan Europe, and the Juke-R’s engorged bodywork conceals the running gear from Nissan’s Ferrari-eating GT-R supercoupe. As you can imagine, squeezing the 485bhp 3.8-litre twin-turbocharged V6 engine, six-speed gearbox and all-wheel drive system beneath the Juke’s compact frame required a huge amount of work.
Advertisement
Advertisement - Article continues below

The project was undertaken by UK-based race and engineering experts RML – who built Nissan’s last crazy hatchback, the mid-engined V6 Micra 350 SR, and have experience in developing racers for the world’s touring car championships, Le Mans and even ovals. The Juke-R has also had assistance from Nissan’s European Technical Centre (NTCE) in Cranfield, Bedfordhsire.
Advertisement - Article continues below
With just 22 weeks to take the Juke-R from hare-brained idea to hair-raising reality, RML’s engineers made extensive use of computer-aided design (CAD) to ensure the internals of the GT-R would fit inside the skin of the Juke. Once that fundamental fact was established fabrication work commenced on a pair of Juke-Rs.
Each remarkable ship-in-a-bottle build not only required the precise dissection of a Juke bodyshell, but the equally painstaking truncation of a GT-R drivetrain. With the propshaft shortened and precisely machined to ensure perfect balance the engine and transmission were shoehorned into the Juke, which then had bespoke wider wheelarches fitted to accommodate the GT-R wheels, brakes and suspension.
The end result is something quite incredible and worthy of comparison with other great factory-built Frankenstein’s monsters such as the legendary Renault Espace F1 and BMW X5 Le Mans.
Advertisement
Advertisement - Article continues below
More remarkable still is the fact both Juke-Rs are road legal and are docile enough for anyone to drive. They even have air-conditioning, which is handy when you’ve invited the world’s media to drive them in the sun-baked Emirate of Dubai.
Advertisement - Article continues below
So what does a near-500bhp Juke feel like to drive? Incredible, that’s what. The roll cage and racing seats add a certain edginess to the initial experience, but once strapped inside the Juke-R is a cinch to drive, largely due to the GT-R’s double-clutch transmission, which requires you to do nothing more strenuous than grab the gear selector and slot it into ‘A’ for automatic shifts or ‘M’ if you want to use the steering wheel-mounted paddle shifters.
From this point on the Juke-R is a crazy, sense-scrambling fairground ride of a car, rumbling and chuntering in typical GT-R fashion, not to mention firing you from corner to corner with absurd and highly addictive ease.
At just over 1,800kg (around 60kg more than the GT-R) the Juke-R is no flyweight, but with all that power and torque it has the same physics defying feel as Nissan’s iconic flagship, yet because it has a shorter wheelbase it’s even more agile – the way it turns into to corners just has to be felt to be believed.
All the GT-R’s electronic wizardry remains intact, and is so clever Nissan has adapted its responses to cope with the Juke-R’s subtly different dynamics, so it exhibits awesome braking stability and tremendous traction. Think of it as a 21st century Group B rally car and you’re not far off imagining the scale of the Juke-R’s abilities.
It might be a marketing tool, but only someone with an acutely suppressed sense of humour (and adventure) could fail to love this mad creation. Unsurprisingly – and a little disappointingly - there are no plans to make Juke-Rs for sale to the public, but that didn’t stop at least twenty people with the means to pay any price approach Nissan with a clear desire to own one while the cars were in Dubai. That speaks volumes for the raw appeal of the Juke-R and quality of the engineering required to create them.
Advertisement
Share this on TwitterShare this on FacebookEmail
Advertisement