Updated Nissan Juke 1.5 dCi diesel is expected to be a top seller - but is it the best model to go for? 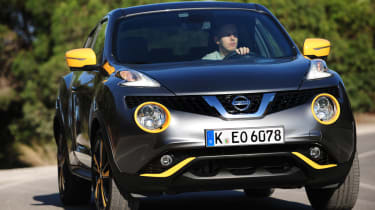 The new 1.2-litre turbo petrol model is perhaps the greatest rival to this Nissan Juke 1.5 dCi diesel, replacing the thirsty old 1.6 with the potential for up to 51.3mpg. However, its CO2 rating is higher than the diesel’s at 126g/km, and thanks to a 70Nm torque deficit, the petrol Juke needs to be worked harder to unlock its turbo’s punch. In everyday driving, this dCi model is the Juke of choice.

While the new 1.2-litre turbo petrol Nissan Juke has stolen the headlines, the updated Nissan Juke 1.5 dCi diesel will be the top-seller in the UK. In fact the 1.5-litre dCi turbodiesel is the only engine not altered for the updated car, because its own tweaks actually snuck into the range just before the facelift, back in summer 2013.

It develops 108bhp, but more importantly a healthy 260Nm of torque. Performance is perfectly adequate for the class, covering 0-62mph in 11.2sec and 109mph flat out. The engine’s grumbly note isn’t as well-insulated from the cabin at higher revs as it is in the Renault Captur – which uses the same 1.5-litre powerplant – but it’s only a small trade-off.

Some superminis feel hamstrung by the weight of a diesel engine in the nose, but the Juke isn’t one of them. It’s genuinely chuckable, and doesn’t feel out of sorts along a twisty B-road. The trade-off comes in ride comfort, which is pretty stiff to afford the Juke its amusingly agile handling. Around a pothole-peppered British city, that’s likely to still prove to be a black mark on the Juke’s dynamic repertoire. 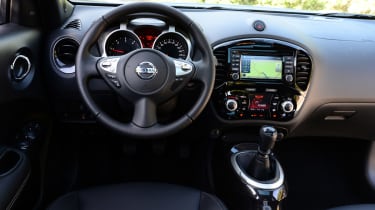 Fuel economy is the reason over a third of UK Juke owners have so far opted for a diesel model, and it’s easy to see why. It’ll average a whopping 67.3mpg and emits just 109g/km of CO2. It’s a welcome slice of sensibility amidst the Juke’s Marmite looks and outlandish cabin, now upgraded with optional contrast-colour trim pieces. The stitched leather finishes for the instrument binnacle hood and armrests go a long way to making the new Juke’s rather brittle interior materials look more grown-up, not to mention more pleasing to the touch.

The win-win here is the revised gearbox, which has shorter ratios for the first three gears to take maximum advantage of the engine’s extra torque, and taller gears for fourth, fifth and sixth. In cut-and-thrust city traffic it will scurry away from the lights, but at a motorway cruise the lengthier ratios reduce engine speed for greater refinement and the best possible fuel economy.

While the dCi engine is a muted cruiser, there’s still quite a lot of wind noise and tyre roar penetrating the cosy cabin. Clearly, the changes to the Juke’s bumpers have been executed in the name of aesthetics, not better aerodynamics and less wind noise.