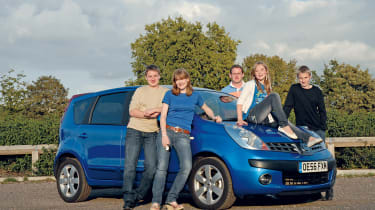 Back in March, when I wrote my first report on our long term Nissan Note, the question waiting to be answered was if size would matter.

Could our award-winning supermini MPV cope with a family of five, including two teenage boys rapidly catching up with their dad’s height? Six months and a school summer holiday later, OE56 FXM has been thoroughly put to the test.

During a holiday to Norfolk, space was at a premium for both passengers and luggage. With three teenagers in the rear, it wasn’t practical to pull the back seat forward and create extra room in the boot. So we removed the load bay’s Flexiboard boot divider to squeeze everything in.

The kids survived the journey, even if my daughter claimed to be squashed in the corner by her stepbrothers. At least they all had access to magazines, games consoles and mobile phones, thanks to the deep pockets on the back of the front seats.

And the glovebox doubles as a chiller cabinet for cold drinks and snacks, so that went down very well. In general, the interior has stood up brilliantly to family use. There are few signs of wear, and the removable mats make cleaning easy. The only real downside is the waffle material used for the seats traps debris which can be removed effectively only with a vacuum. That can be a big problem with chocolate – something my daughter finds it very difficult to go without!

Another minor niggle are the A-pillars, which are cream and have appeared grubby from day one. But at least the Nissan still looks good on the outside, although the Intense Blue paintwork has a scratch on the rear tailgate courtesy of a cyclist who ran into the back of the car.

That blemish should polish out without too much bother, though. On the road, the 1.6-litre petrol engine struggles a little, especially when the car is going uphill with a full complement of passengers on board.

Around town, however, the Note is responsive and easy to manoeuvre through traffic. And economy has improved a little since the last report – it’s risen from 32.4 to 33.3mpg.

Problems? Well, a visit to the local Nissan dealer was on the cards after the doors would not lock during a recent road test. It’s happened only once since then, though, the optional Intelligent Key system letting us down when the car wouldn’t start after refuelling at a petrol station.

On the whole, I am still a fan of the Nissan and, while the Note may not merit a coveted A* in its end-of-term test, it certainly deserves at least a B+ result.