A mystery engine noise has been annoying us during our final few weeks in the note. but guess what? 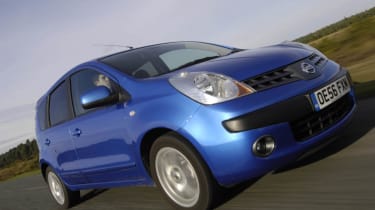 It’s not only the Golf GTI Edition 30 we’re waving goodbye to this week – it’s time for the Nissan Note to leave our fleet, too. And as with the VW, a year at the wheel has been almost entirely painless.

I say ‘almost’, as a few weeks ago, an annoying squeaking noise developed from under the bonnet on start-up. It is particularly bad on cold or wet mornings.

We suspected the fanbelt had slipped out of alignment, and hoped the sound might just disappear. But instead, the high-pitched whine has become more persistent. It stops once the engine has warmed up, although it’s now taking even longer to quieten down.

So, I booked the Note in with dealer Wilsons of Epsom, Surrey – an easy enough process. Even when I had to alter the date at 24 hours’ notice, the staff were polite and efficient. If only the service I received on the day was as good.

Wilsons is enormous, and after dropping off the Note, I had to go to another building to collect my loan car. Not a courtesy model, but a hire vehicle for which I had to pay £20 to rent for the day. Although I had been warned about this on the phone, it still spoiled the dealership experience.

Worse still, I got a call from the service department at lunchtime saying the mechanics could find no fault with the car. Yet what really irritated me was the line that perhaps the noise “was the same as any vehicle makes on start-up”.

Maybe I’m being sensitive, but I’m sure they wouldn’t have said this to a man. It also ensured Wilsons came across as unprofessional and unwilling to find out what really was the matter with the Note. Finally, on collecting OE56 FXM, I noticed the aerial was missing. It’s not as if it’s small, but I had to wait 20 minutes before a staff member appeared clutching the offending item!

While the whine is still annoying me, I am really going to miss the Nissan. It looks stylish, drives well and has coped admirably whether it’s nipping round urban roads or loading up for family days out. The rear has provided enough space for three growing teenagers, and the light steering and responsive engine have made commuting to work relaxing. If only the same could be said of the dealership.

Perfect blend Dawn has found keyless entry system useful, while rear seats offer plenty of space. Not even flat caused by nail can take the edge off running Note, with its great cabin and driver appeal.