There are some people you simply don't want to pick a fight with - characters so imposing that you wouldn't even whisper an insult behind their back, let alone to their face. And while it's not exactly a thug, the Nissan Patrol is a perfect example. 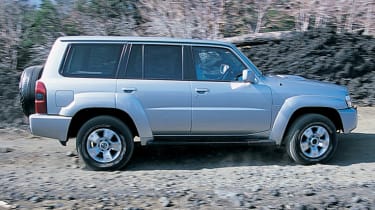 If you're looking for a BMW X5 or Land Rover Discovery alternative, you won't find it here. The Patrol is a no-nonsense mud-plugger, and is unsuitable for those who do lots of motorway miles or town driving. But if your job demands off-road versatility, solid build and inherent reliability, there aren't many models that come close.

There are some people you simply don't want to pick a fight with - characters so imposing that you wouldn't even whisper an insult behind their back, let alone to their face. And while it's not exactly a thug, the Nissan Patrol is a perfect example.

Essentially, it's a back-to-basics off-roader. While rivals are churning out SUVs with road manners to match the most luxurious limousines, Nissan is expanding its 4x4 line-up in two different directions. The leisure SUV market is catered for by the X-Trail and the forthcoming Murano, while those who want a car that needs to earn its keep can choose from the Terrano, the Navara pick-up or this...

The new Patrol is based on the running gear of the outgoing model but, with the exception of the roof, every single panel is different. A redesigned front bumper now incorporates sunken foglamps, designed to protect them from off-road damage, while the wings have chunky plastic-clad wheelarches and the side-steps are integrated into the sills to prevent them becoming bent in extreme conditions.

Inside, seven seats will be included on all but the basic UK version - although we were unable to try this variant on the European launch - while the fabrics and contours are revised. Unconvincing fake wood adorns the dashboard, but the top-of-the-range SVE model will feature Nissan's class-leading Birdview satellite-navigation system and leather trim as standard.

Compromise On the road, the Patrol is a car you have to make compromises for. Performance from the 3.0-litre engine is sluggish, especially if you choose the automatic gearbox, while the transmission in manual cars is sloppy, and requires a firm shove to get it into gear. The big Nissan is fairly refined at cruising speeds, but its recirculating ball steering isn't the most accurate and the ride is fidgety on broken tarmac.

However, give it more demanding terrain and the Patrol really comes into its own. Slip into the low range gears, flick a switch to lock the diffs and press a button to disengage the rear anti-roll bar and you're ready to head off-road. And the car has suspension articulation that will put the frighteners up rivals as tough as the Land Rover Defender.

The beam axle and coil spring arrangement might give the Patrol a rough ride on-road, but to prove its mettle, we drove the newcomer up a lava trail to the top of Mount Etna. Mudplugging doesn't come much more extreme, and the Nissan took even the roughest of rocks and steep descents in its stride.

It may lack road manners and prove too cumbersome to live with in town, but if you dare to question the Patrol's machismo, believe us, it'll eat you alive.