The Patrol's a serious off-roader, but shows its age on tarmac 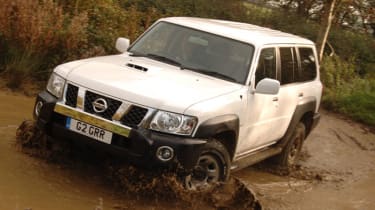 There’s no doubt the Patrol is very capable off-road. But it shows its age on tarmac, where it’s outclassed by today’s new SUVs. So unless you need its serious mud-plugging ability, go for an all-rounder, such as Nissan’s own Pathfinder, which costs the same, seats seven and is equally happy on and off-road.

At a time when luxury SUVs and sporty cross-overs are racing up the sales charts, true off-roaders are a rare sight.

Take Nissan’s Patrol for example. This huge 4x4 is more likely to be found driving across deserts or serving with the United Nations than it is on the morning school run. So is the company’s new entry-level model the key to increased popularity?

Priced at £23,995, the Patrol TREK is £4,000 cheaper than the top-of-the- range Aventura, which costs nearly as much as newer and more luxurious off-roaders such as the Land Rover Discovery. The TREK does without extras such as the Aventura’s leather upholstery, privacy glass, 17-inch alloy wheels and satellite navigation, but it is fitted with air-conditioning and has all the right off-roader credentials.

There’s nothing the Patrol can’t handle when the going gets tough. The 4x4 has a separate ladder chassis, huge ground clearance and lots of suspension travel. There’s also a low and high-range transmission – operated by a big, chunky lever, rather than a simple button – plus differential locks. Build quality feels rock-solid, too, and there’s no shortage of space inside, either. However, the interior trim is poor, and the dashboard’s design is dated. Mind you, that’s not the Nissan’s worst aspect. The driving experience is...

Thanks to its vast dimensions, huge turning circle and poor visibility, the Patrol is not best suited to city streets. But get on to some bumpy, twisty country roads and you might wish you were back in town.

There’s very little feel through the low-geared steering, and lots of body roll, thanks to soft suspension, plus a worrying feeling of instability at motorway speeds. Oh, and with a default rear-wheel-drive setting, it can be tricky in the wet, too.

And the 3.0-litre diesel engine? It certainly pulls well in the muddy stuff – thanks to the healthy 380Nm of torque – but it feels coarse and sluggish when the Patrol’s on the move.

The Nissan has never tried to be anything more than a rough and ready off-roader – and in TREK trim it does represent good value. However, rival 4x4s have now moved the game on too far for it to be able to compete.