It's celebrating its 50th year, but is now the time to buy a used version of the legendary Nissan Patrol? 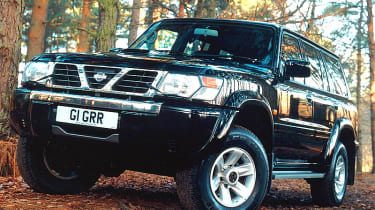 Big, unbreakable and affordable - the legendary Nissan Patrol deserves its reputation, thanks to a history stretching back nearly as far as Land Rover's. Celebrating its 50th anniversary this year, the Patrol is an unstoppable off-roader, but its ability comes at a price.

Until the GR arrived in 1998, on-road refinement was non-existent. The new car was comfortable, well equipped and efficient, and the most popular SE trim included ABS and air-con. SE Touring spec added electric seats. A 130bhp 2.8-litre turbodiesel engine powered the first models, and the better 156bhp 3.0-litre Di replaced it in 2000.

Three-door versions cost less than five-doors, but the latter are the pick and can be bought for under £7,000. Even cheaper cars are sensible buys, as the Patrol is incredibly reliable. It's a perfect machine for city centre warfare.

The Patrol is huge, but rarely feels lethargic, particularly in 3.0-litre guise. It's a capable cruiser, although refinement is compromised by its considerable off-road ability, with roll through corners and a jittery ride on motorways.

At speed, the steering is vague, but in town it's relaxing. Just be aware that the brakes are slow to respond. The roomy cabin offers a seven-seat option, making the Patrol a true MPV alternative.

As there are only two models in the Patrol line-up, sales volumes are going to be low - meaning good used ex-amples remain difficult to find, especially late-plate 3.0 Di variants.

Facelifted models (from December 2002) are the ones to have. Values have held up well recently, and in January they increased by two per cent because of the poor weather. Price stability is expected to remain, provided the Government doesn't start penalising 4x4 owners with extra taxes.Jeff Paterson, senior editor, Glass's Guide

Life with a Patrol

I work in the country, and have both a Land Rover Defender and a Patrol. There's little to choose between them off-road, but the Nissan is a much more comfortable car. I do find it a bit dull, though.Jim Barker, Louth, Lincolnshire

My Patrol isn't as economical as I hoped, but it feels big and tough. It's far more enjoyable to drive than the Ford Galaxy I had before.Kim Hedley, Paignton, Devon

There are some die-hard Land Rover fans in the Auto Express office, but even they admit they'd rather be in Nissan's Patrol than the Defender Station Wagon. On the road, the Patrol is surprisingly refined, if fairly agricultural to drive. The cabin is spacious and well laid out, while the third-row bench will accommodate two adults, making the Nissan a genuine seven-seater. Throw in amazing off-road ability, and the Patrol makes incredibly good sense.