Celebrating 10 years of the Nissan Qashqai 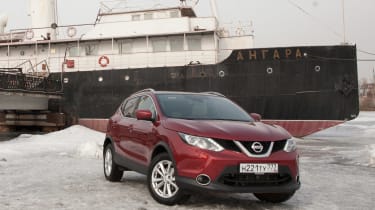 “If the ice breaks, you have between 10 and 60 seconds to leave the car before it sinks. If you can’t open the doors, go through the windows or the roof.” These were the stern instructions from the man representing the Russian Ministry for Emergency Situations just before we headed out on to the frozen surface of the deepest lake in the world in a Nissan Qashqai.

Lake Baikal in Siberia is an odd place to find yourself in a car originally intended for the European market, but when the Qashqai was launched back in 2007, no one could have predicted just how successful the crossover would become, or the remote corners of the world it would end up in. Today, the Sunderland-built Qashqai has moved far outside European borders and is sold in 99 countries around the world, from Antigua to Australia.

To coincide with the 10-year anniversary of the Qashqai, and the launch of a new facelifted model later this year, Auto Express took the current, second-generation version into the wildest parts of Russia. Nissan started production of the Qashqai here in 2015, and we were keen to find out how it’s evolved from a European crossover to a car that’s conquered global sales charts in just a decade. 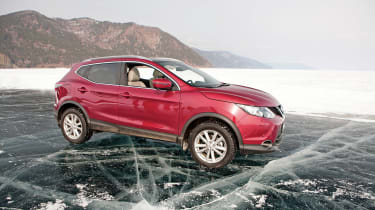 Initially the Qashqai wasn’t even the car that Nissan intended to build. Back in 2002, a new version of the Almera was planned, but the company came to the conclusion that the poor-selling family car was unlikely to turn a profit, even with a new look. Around the same time, SUVs were rising in popularity, but some buyers were put off by their large proportions and high running costs.

So, instead of a new Almera, Nissan decided to design and build a car that “would break down some of the barriers to SUV ownership”. To do just that, it began incorporating the low running costs, compact dimensions and agile handling of a hatchback with the tall ride height of an SUV, creating one of the world’s first-ever crossovers. The UK played a major part in the design, engineering and building of the Qashqai, too.

Much of the design work was funneled through Nissan’s Design Centre Europe, which is based in London, while the company’s European Technical Centre in Cranfield, Beds, was tasked with developing the engineering framework – only the second time in its history that the centre had been commissioned by Japan to lead the development of a model from scratch.

The company’s Sunderland plant then won the bid to build the Qashqai, with an initial production target of 120,000 cars a year. But there were fears that the crossover would struggle to sell, and that total was optimistic. Would buyers see the car as the best of both SUV and hatchback worlds, or would it fall short of both marks? 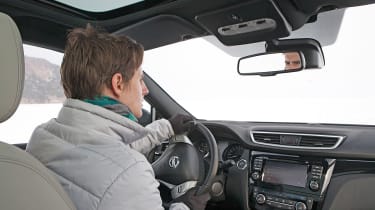 The worries were unfounded, however, as the crossover quickly proved popular. Nissan had to increase production to 160,000 in the first year, with the Sunderland plant running three shifts a day to keep up with demand.

Today, the crossover segment that the Qashqai created – as well as SUVs – account for over a quarter of all new car sales around the world. And our location, deepest Siberia near the Mongolian border, is perhaps the most extreme example of what the crossover has to cope with on a daily basis. With temperatures easily dropping below -35 degrees Celsius in winter and roads punctured by thousands of potholes, the crossover has to cope with a lot more than the average Sunday supermarket run in Surrey.

“We’ve adapted the Qashqai to suit the different driving conditions in Russia,” said Mikhail Vakhrushev, Nissan’s product manager in Russia. Although Russia’s first-generation Qashqai was nearly identical to the European model, the second-generation, which is now also produced in Nissan’s St Petersburg plant, was adapted from the ground up to better suit local driving.

To deal with the rougher roads, the Qashqai Mk2 was built with 200mm higher ground clearance and softer suspension. It was also made wider to improve stability on poor roads. As we drive through the Siberian town of Irkutsk, we quickly find out why these changes were necessary. The roads appear as if they’ve been abandoned for the last decade with barely any markings visible, while ankle-deep potholes are impossible to avoid due to their sheer quantity. The roads also have a habit of switching from a paved surface to a dirt track unexpectedly. To deal with the inevitable flat tyres, Russian Qashqais come as standard with a full-sized spare wheel. 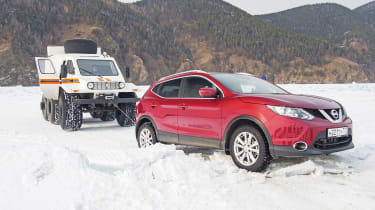 And while nearly every second car bought in the UK is a diesel, just five per cent of all cars sold in Russia are. “The quality of diesel can be quite bad in the country, so people opt for petrol cars instead,” explains Vakhrushev.

To cope with the freezing temperatures, all models get a heated windscreen as standard, while those equipped with a parking camera come with a self-cleaning spray to remove muck from the lens that easily accumulates from the many dirt tracks that snake through the Siberian plateau.

But roads made of tarmac or gravel aren’t the only place a Qashqai owner might find themselves driving across in Russia, or indeed any of the other Arctic countries the car is sold in. Many of the lakes and rivers freeze in the harsh temperatures and are turned into temporary crossings for motorists.

So we found ourselves driving on Lake Baikal, the deepest and oldest lake in the world. It contains roughly 20 per cent of the world’s unfrozen fresh water, is estimated at 25million years old, and is over a mile deep. Several hovercrafts are spotted crossing the frozen lake, but every now and then you’ll spot a local or two driving across in anything from an old Soviet-era Lada to a new Toyota Land Cruiser. 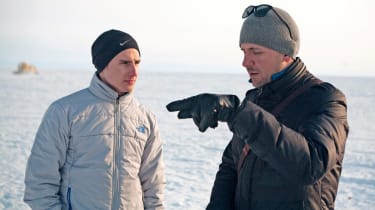 It was no more than an hour after the ‘safety’ speech from the Russian Ministry for Emergency Situations that we stopped and parked our Qashqai on the ice. As we stood nearby, we suddenly heard a sound similar to an explosion. Some of the ice sheets had just cracked and as we struggled for balance, we saw our car tip with the moving ice.

The raised ride height helped it stay afloat, but it was firmly stuck, so we had to wave for rescue. A four-man team from the Ministry of Emergency Situations arrived in their six-wheeled rescue vehicle, smashed through the cracked ice sheet and winched the car to safety.

It just goes to show that while the 10-year-old British-built Qashqai might not have worked out how to conquer nature just yet, it seems there’s no stopping its continued dominance of the global sales charts. 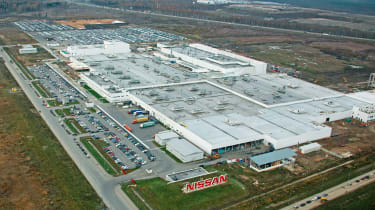 Sunderland isn’t the only powerhouse behind the Qashqai. In 2009, Nissan opened up a new factory in St Petersburg, Russia, to help fill the global order books alongside its UK and Japanese plants.

The plant originally built the X-Trail, Murano and Pathfinder, but in 2015, the Qashqai Mk2 was added to the production lines.

Are you a fan of the Nissan Qashqai? Let us know your thoughts below...