From hot hatches to supercars, news and reviews editor Jonathan Burn looks back on the drives that stand out 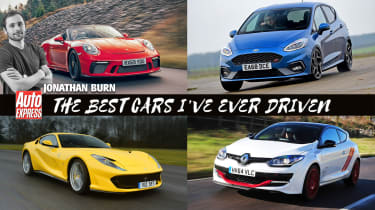 Before working at Auto Express, which he’s done for seven years, Johnny was a subscriber. Magazines kickstarted his interest in cars many years ago, along with his dad’s love for British classics. Old MGs, Triumphs and Minis were regular features on the driveway – we won’t mention the diesel Jaguar X-Type.

Throughout this series, we’ve seen two Ferraris, a McLaren and a Porsche top the ‘Best cars I’ve ever driven’ list. All of them deserve to be there because, quite simply, they’re all exceptional machines. But for me, the overall appeal of a car has as much to do with how attainable it is, as the grin it puts on your face.

Of course, attainability is a relative concept, but for me nothing comes close to the latest Ford Fiesta ST. Sure, I’ve driven cars that are faster – much faster – cost a lot more, and make you grip the wheel tighter, as well as some that are close to addictive. But the Fiesta ST perfectly encapsulates what makes a truly great driver’s car.

When the model was first introduced, I remember there wasn’t a single thing I wanted to drive more. The previous ST was stellar, so I had high hopes for the latest version – but I also had some reservations, because the moveto a three-cylinder engine was unheard of for a hot hatch. 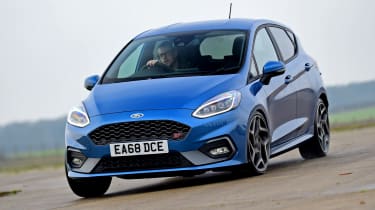 My first chance to drive the ST came when I managed to persuade our senior reviewer, Sam Naylor, to give me the keys to his fleet car for a weekend – the very car you can see above. I planned a route from London to my hometown of Newcastle, which veered off at the Yorkshire Dales, went up through the North Pennines and finally ended in the barren but beautiful hills of Northumberland.

My first impression was being truly amazed by the quality of the ST’s ride. The previous model was about as relaxing as a trip down a flight of stairs, but the latest version was more than comfortable enough to use everyday. That thought was compounded after 200 miles on the M1.

Over the Yorkshire Moors and North Pennines, the ST just got better and better. The more I drove it, the more I loved it. The power delivery, rate of response, steering, balance, noise... everything felt so well engineered and put together. I enjoy driving it as much today as I did back when it was launched, and I wouldn’t think twice about spending my own cash on one if I had the opportunity.

I’ll be the first to recognise that having a £262,963 Ferrari as number two on my ‘best drives’ list contradicts my previous argument about attainability – but sometimes a car simply leaves you truly stunned. And that’s exactly what happened when I had the chance to drive the 812 Superfast.

The images you see here are, in fact, the exact shots we snapped for a drive report back in 2018 – our first chance to experience the 812 in the UK. I had to get myself to Ferrari’s UK HQ in Slough first thing on a cold Tuesday morning in March to collect the car; the lurid yellow paintwork contrasted wonderfully with the rather miserable weather.

Even sitting still, the 812 just looked intimidating. And then I was handed the spec sheet, which said the model I was about to navigate back through London traffic was listed at £337,555, fully kitted out. It had around £75,000-worth of extra trinkets fitted to it. 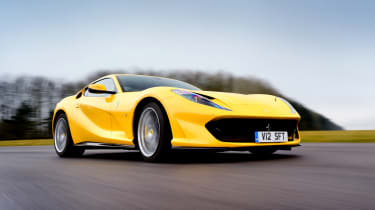 From start to finish, the thing that dominated the 812’s driving experience was the monstrous 6.5-litre naturally aspirated V12. Given the industry’s focus on electrification, there’s unlikely to be an engine like it ever again without the presence of some form of electrical assistance. It will undoubtedly go down as one of the greatest powerplants of all time.

Right from idle, a mere flex of my right foot brought a tidal wave of noise and power. Bruntingthorpe Aerodrome’s two-mile runway felt like an appropriate setting given the ferocity of the acceleration. Every gearshift was accompanied by a thump in the back as the revs and speed continued to climb at relentless pace.

The 812 Superfast is also one of the few cars that’s genuinely terrified me behind the wheel. The narrow, winding and greasy back roads around Bruntingthorpe were not what this model was developed for. Thankfully I managed to return it to Slough without so much as knocking a penny from its outrageous price tag.

Hot hatchbacks have, arguably, one of the toughest jobs around. They’ve got to be comfortable enough to use everyday, affordable, practical, reasonably cheap to run and, most importantly, incredible to drive. Plenty of car makers do it well, but few do it better than Renault.

And what puts the brand head and shoulders above the rest is the lunacy it applies to a few, small examples – in this case, the 275 Trophy R. Renault turned what was already an incredible hot hatch, the Mégane 275, into one of the most extreme and intoxicating performance cars on sale. 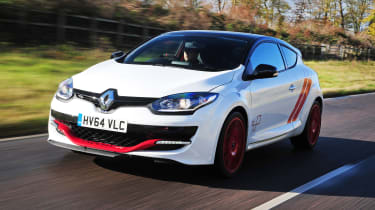 The model was hardly a porker to begin with, but around 100kg was further stripped out by removing the sound deadening, rear seats, air-conditioning unit and even the rear wiper. Lightweight alloy wheels and Öhlins adjustable dampers were added, along with Recaro bucket seats with six-point harnesses to round off the stripped-out road racer.

The result was simply spectacular; the whole model just felt raw and totally focused. The 271bhp 2.0-litre engine was respectably punchy, but the raspy exhaust note and anti-social pops and bangs on the over-run gave the car real character. Even more impressive was the snickety six-speed manual transmission, whose action was short and sharp with every gearchange.

Meanwhile, the chassis had a lovely balance to it, and the steering boasted a beautiful weight and feel. On the right road, the 275 Trophy R often felt like a mini touring car. These models have also held their value very well, so it’s not only a fantastic road car, but a genuine investment, too.

If you haven’t owned a Mini, you almost certainly know someone who has. This pocket-sized runabout is an absolute icon of the British motor industry, adored up and down the country despite its woeful reputation for reliability.

It’s something I have first-hand experience of, because the first car I ever owned was a 1993 Mini Cooper. I bought my example for about £3,000, and spent a further £3,000 on repairing the weekly occurring issues over a number of years. The best one – although I’m not sure my parents would agree – was the fuel tank that spontaneously haemorrhaged overnight, resulting in a melted driveway. Sorry, dad. 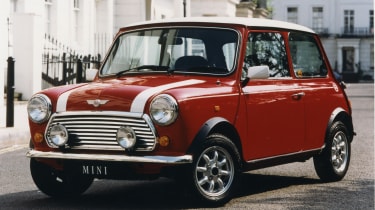 However, when the Mini wasn’t in the garage being repaired, it was an absolute treat to drive. A real back-to-basics experience, the enjoyment came from its simplicity and eager, darty nature. A lack of power steering meant I could almost feel the road surface through the wheel, while the pocket-sized proportions and fantastic all-round visibility meant I could place the car exactly where I wanted it on the road.

The 911 Speedster was Porsche’s 70th birthday present to itself in 2018. The best way to think of it is as a roofless 911 GT3 – and as combinations go, that takes some beating. Nestled behind the driver, hanging over the rear axle, sits a 503bhp 4.0-litre flat six that wails its way to 9,000rpm. And getting there requires some hard labour, because the only gearbox available is the brand’s fabulous six-speed manual.

My first experience of the Speedster came in the snow-dusted surroundings of the Yorkshire Dales last November. The temperature hovered around zero for most of the day, as snow fell delicately from the sky – far from ideal conditions. However, the roof stayed down while the hat and gloves remained on, along with an enormous grin plastered across my face. 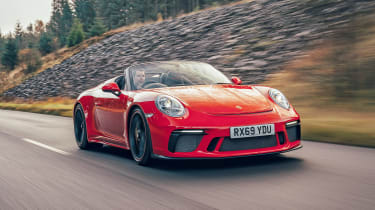 The combination of the 911’s noise, the tactility of the controls, and its overall balance made the drive truly memorable (and achingly cold). Take a 500bhp supercar out in conditions such as that and you’ll more than likely be on the phone to your insurer within a matter of minutes, yet the Porsche felt manageable and controllable. The smooth, linear power delivery of the flat six certainly helped, as did the balanced chassis with which all Porsches appear to be blessed.

Only 1,947 examples were produced worldwide, with some swapping hands for up to £1million on the second-hand market immediately following its launch.