Our editor-in-chief has chosen his greatest drives, including the McLaren 720S and Lotus Elan 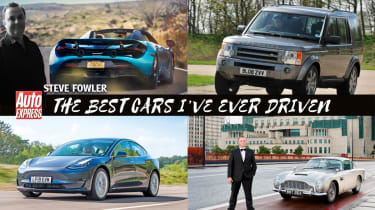 You cannot beat a great car on a great road. Auto Express editor-in-chief, Steve Fowler has been writing about cars for nearly 30 years, but the thrill of getting behind the wheel and knowing a car maker is onto a winner never diminishes for him. It doesn’t happen that often but it has on a number of memorable occasions in the past.

Below you'll find Steve's pick of the best cars he's ever driven and his views on why they stood out...

But the 720S Spider is a car with a breadth of ability that’s as breathtaking as its acceleration with launch control on and the throttle pinned to the floor. For the record, 0-60mph flashes by in just 2.8 seconds. More than that is the way it makes performance accessible to mere mortals, all while keeping you safe. 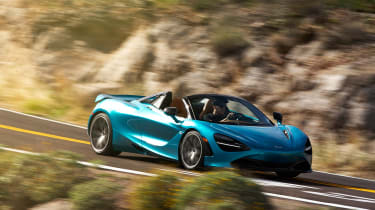 It’s a blend of good old-fashioned engineering nous with up-to-the-minute technology – it’s a Woking miracle. Other than the obvious – a clever folding carbon-fibre roof that can feature electrochromic glass – the only changes to the coupé version are different doors, glazed flying buttresses at the back and tweaks to the fabulous Bowers and Wilkins sound system for top-down driving. And with the top down and the rear glass lowered, you’re a little closer to noise of the 710bhp, 770Nm twin-turbo V8 doing its business. Sure, you’ll get a more intoxicating noise from a Ferrari, but that’s splitting hairs.

You won’t want to be listening to the exhaust all of the time, though; this McLaren can become a refined tourer when you want it to and will even pootle around at low speeds without stuttering like supercars of old.

McLaren took us to Arizona for the 720S Spider launch – a place I know well, with family living close by. The scenery heading north of Scottsdale and out towards Lake Pleasant is truly spectacular. And, once you’re off the highway and heading up into the hills, the McLaren comes into its own. Diving up and down through twists and turns, the sound of the V8 bouncing off the hills around you; roof and windows down and warm air rushing through the cabin – now that really is my idea of automotive heaven.

Others may bemoan the lack of a Porsche or a Ferrari in this list, but for me, British is best. The McLaren 720S is the best performance car I’ve ever driven. It’s fast, flattering and fantastic fun; a real engineering milestone.

So you find yourself with some time on your hands in San Francisco. What do you do? You call those nice people at Tesla and ask if you can go to look around the factory. “Sure,” they say, “and do you fancy driving the new Model 3 Performance model, too?”

It was an opportunity not to be missed, especially because no one outside of the US had driven one yet. So off to Fremont I went, did the factory tour (worth more than just those few words, I can tell you), hopped into the Model 3 and headed for the Californian hills up behind the factory. 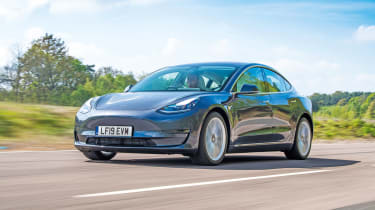 Now, I was a fan of the Model S beforehand, but my Tesla love was instantly transferred to the Model 3. It may not be as quick as the S – its 0-60mph time is ‘only’ 3.2 seconds (0.8 seconds behind the S Performance), but there’s much more than just acceleration. And in any case, can anyone really tell the difference 0.8 seconds makes at that speed?

What I love about the Model 3 – hang on, not many words left – is that it adds in a dose of handling prowess to go with that performance. Okay, it’s not as wieldy as a BMW M3, but it’s grippy, the weight of the batteries helps keep the centre of gravity low, the steering is quick, and whenever you get the chance, you can just put your foot down and… wahey!

It’s a car that just makes you giggle – and who doesn’t like that? It’s also a tech-lover’s dream, with a minimalist cabin to die for and quality that’s better than expected.

H3 LAN. That was the registration number on my very own Lotus Elan SE that I took delivery of in December 1990. That registration now lives on a Mercedes, but the chances of ever tracking down ‘my’ car are pretty slim anyway.

So why did I spend my own money on an Elan? Back then I was just a reader of motoring magazines and I remember one title telling me I should sell my dog, cat and grandmother to get an Elan. I didn’t go to quite those lengths.

By today’s standards, my Elan wasn’t particularly fast in a straight line – its buzzy 1.6-litre turbocharged, Isuzu-sourced engine had 162bhp and got from 0-60mph in 6.5 seconds – but it was quick enough for me. 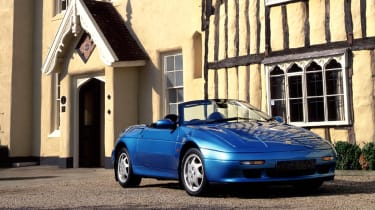 The most fun to be had was in the corners, thanks to the engineering solutions Lotus engineers came up with to make this front-wheel-drive roadster appeal to enthusiasts.

Put simply, it could go around corners like little else at the time, regularly putting a huge grin on my face and a similar-sized smile on my passenger’s – usually with relief and disbelief that we’d actually got around a corner at such speed, and without so much as a squeak from the fat Michelins wrapped around the OZ alloys. There would be a regular ‘there-and-back’ route I’d take friends on near my home in Kent, through tight and twisty country lanes, sweeping swiftly down a long straight and then around a roundabout at frankly unbelievable speed before heading home again. The Elan’s broad footprint kept it sturdy, although the width meant you’d breathe in if you had to go through a narrow bit. And the turbo engine produced a suitably fruity exhaust note that added to the excitement – all amplified with the roof down, as it had to be (not because it wouldn’t go back up!).

My Lotus and I went on holidays, track days and daily commutes. What I’d give to get it back on my drive again.

Sometimes it’s hard to avoid a cliché. And when you’re invited to drive James Bond’s Aston Martin DB5 – yes, complete with BMT 216A registration – you have to dress the part. So I went full tuxedo – at 6am – and headed straight for MI5’s headquarters by London’s Westminster Bridge for the photoshoot.

There’s no chance anyone mistook me for Britain’s favourite spy – more probably a bloke who’d had a good night out and was still on his way home. But being behind the wheel of one of the world’s most iconic cars made me feel like a million dollars. Probably the value of the car, too. 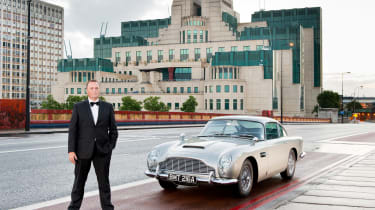 The excitement of driving around Parliament Square in a DB5 overshadowed the fact that, bluntly, the DB5 isn’t all that nice to drive by today’s standards. Its straight-six, four-litre engine rumbles away nicely up front, with the beautiful dials with their wobbling needles trying so hard to give an accurate reading. But throttle response is a bit slow, leading to a 0-60mph time of just over eight seconds, while the car leans through corners as you hang on to the heavy unassisted steering. At least the ride is more likely to leave you stirred than shaken.

However, drive many a sixties legend and you’ll come away with tears in your eyes for what it represents and how it makes you feel, rather than what it actually does. Fun doesn’t always have to be measured in fast figures, and the smell of the DB5 alone will make the hairs on the back of your neck stand to attention. And, frankly, to enjoy the DB5 you don’t have to drive it – you can just admire it. Those elegant flowing lines combine with just enough shiny chrome details to make this the most beautiful car I have ever seen.

Hang on. Greatest drives? And there’s a whopping great big SUV in here? Ah yes, but the Discovery 3 is one of those cars that is so good I can remember where I was when I first drove it.

Bear with me here, because this may sound a little odd. I was actually driving down Walton-on-Thames High Street when it dawned on me: this is one of the best cars I’ve ever driven. 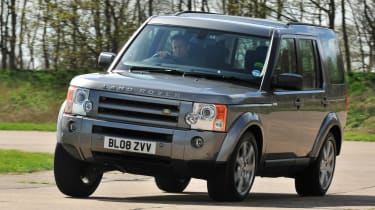 Lovely though Walton-on-Thames is (okay, I’ll be honest, I can’t really remember) it’s not exactly the Stelvio Pass, is it? But then there are cars that are made for the Stelvio Pass and there are cars that are made for, well, Walton-on-Thames. I’m doing the Discovery 3 a bit of a disservice, because I’ve taken it through Land Rover’s famed Jungle Track at its Solihull HQ, trekked across Scotland in one and enjoyed the green lanes of Wiltshire on many occasions. And I can confirm that it’s massively capable off road. But having lived with one for a year with my (then) young family, there really was nothing better for clever use of space – it was very clearly designed by someone with my family in mind.

As for me, my greatest bugbear is cars that don’t ride well – and that’s still too many today in my book. But for such a big, heavy car, the Discovery 3 rode as well as a Range Rover. It was quiet, pretty much as efficient as a modern Discovery and, in silver and HSE trim, still looks great today.

Granted, it’s not a car to throw around on a track. But its spread of talents was so great – and remains so – that I still wouldn’t mind living with one today.