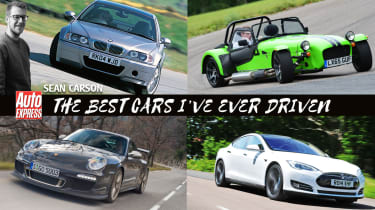 Sean’s story with cars started from a young age, influenced by family working in, and with a love for, the car industry. He turned a passion into a profession, and with 10 years’ experience road testing, he loves everything from classics to EVs, but has a real attraction to lightweight, hardcore motors, as you’ll see below where our chief reviewer picks the best cars he's ever driven.

As with some of my colleagues’ top fives, I’ve been lucky enough to drive hypercars such as the Pagani Zonda F Clubsport and the McLaren Senna. But none has managed to supplant, for me, the Porsche 911 GT3 RS 3.8 in 997.2 vintage as the best car I’ve ever driven.

Objectively, there are better performing, faster cars with more grip, but this generation of GT3 RS serves up everything I want from a hardcore track-focused car. It’s a challenge to get the best from it, exactly as it should be.

It’s powered by a rear-mounted 3.8-litre naturally aspirated flat six with 444bhp; that’s not a lot by today’s standards, but with no turbos and an appetite for revs – plus one of the very best soundtracks that simply screams ‘motorsport’ to me – it’s a lovely engine to work hard. 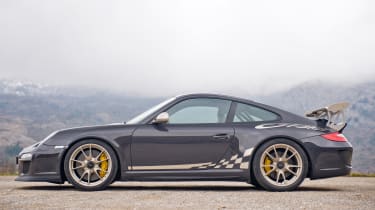 It’s made all the more interactive by a six-speed manual gearbox that has the kind of reassuring positivity you want in a track car, with a short throw to snick changes home. It’s weighty, mechanical and involving, and every gearshift, up or down, punctuates the engine’s assault on your senses.

The classic ‘Mezger’ engine is hungry for revs, and the lightweight flywheel helps the motor’s appetite, ripping towards the 8,500rpm limiter (lofty now, let alone a decade ago) with a metallic zing, or blipping between ratios on heel-and-toe down changes.

This is what modern performance cars don’t deliver: you really have to drive the 997.2 GT3 RS. Every input has a direct effect on the car. And while the rarer GT3 RS 4.0 that came after this RS is the collectable version, offers more grip from its rose-jointed rear suspension and a little more focus, it’s the 3.8 I like most.

Both cars have beautifully clear and detailed hydraulically assisted steering – again, something that’s an exception these days. The steering wheel offers an old-school 911 trait, chattering away, relaying to your palms information on the surface you’re travelling over and how much grip there is.

There’s plenty of traction, obviously, but compared with ultra-wide modern 911s, even the flared body of the GT3 RS is relatively narrow; from the driver’s seat you can touch the passenger door card easily – try that in a 992. With the front track being narrower than in 911s we know today, there is some understeer if you don’t trail the brakes into a corner, keeping weight on the nose to pin the front tyres into the road, bringing the rear end subtly rotating into play as you turn in. It takes some practice, but once you get it right there are few better feelings you can get from behind the wheel.

The RS doesn’t struggle for traction. Get the car settled on the exit of a corner and pin the throttle, and it squats, keying the tyres into the road and driving forward hard. Ceramic composite brakes offer massive stopping power in this lightweight 1,370kg machine, too.

In every area the GT3 RS is outclassed objectively by more modern machinery, but subjectively it is, for me, the finest driver’s car there is.

I didn’t get to sample the E46 BMW M3 CSL when it was new, not from the driver’s seat anyway – I had to wait a few years for that delight. But this car holds a special place for me. My old man bought one of the 422 right-hand-drive cars BMW earmarked for the UK with a fairly chunky discount, because the CSL wasn’t a fast seller. At around £15,000 more than the already brilliant standard M3, it was pricey, but it was worth it.

Forget the notions of the ‘stupid’ cardboard boot floor and no air-con. Most UK cars had climate control, and my family used ours to get to the Le Mans 24 Hours in 2004. The boot took our luggage, including a tent, easily, and the floor didn’t collapse... 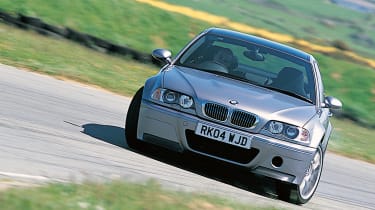 This trip captured my imagination. A decade later on a journey to BMW’s HQ in Munich, celebrating the CSL’s 10-year anniversary, I got to experience the savage induction roar reverberating from the carbon-fibre airbox that fed fresh air to the high-revving 355bhp 3.2-litre straight six in full clarity. It sounded like a touring car. I also got to experience the sluggishness of the SMG II semi-automatic transmission as it lurched between gears and slurred changes at full throttle. I guess that’s called ‘character’.

The balance was lovely, though. It has near-perfect weight distribution and is relatively light, at 1,385kg. This is one of those cars that serves up a brilliant ratio between power and grip, so it felt exciting all of the time. And by modern standards it also felt compact and bursting with energy.

I loved its rawness, and the fact its M Division adornments are so subtle. They give it a brooding menace that no other 3 Series has been able to match for me. I think it’s one of the best-looking cars ever.

This is the first of two Auto Express fleet cars that I’ve run to feature in my list – but the Caterham Seven is very special to me.

I like Sevens so much that I own one, so when Caterham revamped the range back in 2015, I was a natural choice to run the car when we got the green light from the British brand.

While it was updated with some tweaks to the line-up and equipment, the Seven has endured more than 60 years in various forms. It’s not changed much in concept, and it’s all the better for it. The 2015 car I ran started life as a 270S, with a 135bhp 1.6-litre naturally aspirated Ford engine and a five-speed gearbox from a Mazda MX-5. It weighed around 500kg, had a limited-slip diff and was lovely, but it was improved when Caterham upgraded it to 310S spec, with power increased to 152bhp. 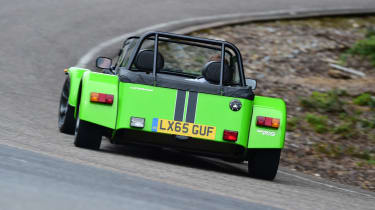 Now the car had enough grunt to really steer it with the throttle, tapping into the analogue brilliance a Seven delivers when modern cars are increasingly digital in their approach. There’s no power-assisted steering, so you feel almost every imperfection the wheels roll over. The level of communication is on a different plain to even the best modern sports cars, and with no ABS or ESC, it’s down to you.

That’s the best thing about a Caterham though: every input is reflected in what the car does – if you don’t get your heel and toe downshift spot on, for example, it can upset the car going into a corner.

Get your downshifts right with a blip of the throttle and it’s wonderful. The transmission feels like you’re part of the gearbox, while sat so low in the car, the chassis wrapped around you almost like an extra coat, the Seven is one of the most fun cars to drive at any speed.

Its design is something of an anachronism in today’s safety-focused world, but being behind the wheel of a Caterham represents pure driving at its very finest.

I was at the back of the Westfield shopping centre in Shepherd’s Bush, London, when I first knew that the motoring world would change. It was in 2013, and Tesla had a pop-up retail unit where journalists could collect press loans from.

Just one smooth flex of my right ankle in an early Model S was enough to convince me that the electric car had a future as mainstream transport. 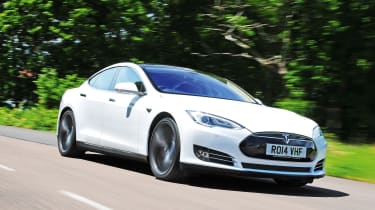 Up to then, EVs had been curio hatchbacks or saloons with limited battery capacity; Tesla was the first company to crack it with genuinely usable range, massive performance and a premium feel. The Model S is the reason why we have upmarket EVs from Jaguar, Audi and Mercedes today.

It wasn’t the best-built car around, although this has since improved, but the on-board tech, with that massive 17-inch central touchscreen infotainment system, meant the Model S had the wow factor.

And it backed this up with how it drove. Okay, the ride was a bit lumpy, but the refinement and acceleration were massively impressive, while the calibration of the regenerative braking was superb for a first effort. For me, Tesla was the pioneer

of proper one-pedal driving which, despite the Model S’s sizeable girth, meant the car was very relaxing to drive in town, and easy-going on the motorway, too.

Look at the state of play now in the premium EV sector, and you’ll see legacy manufacturers are only really just catching up with Tesla in this space. Even the Model S hasn’t changed too much – there have been some styling tweaks that make the car much slicker, more powerful versions, more energy-dense batteries, and dual-motor performance models with four-wheel drive. But aside from a rationalisation of the range towards the end of last year, the basic recipe is very similar, proving just how right Tesla got it initially.

The Model S has stood the test of time and will go down in history as one of the cars that changed the motor industry forever.

The up! has already featured in this rundown of the best cars Auto Express staffers have driven. But I rated the TSI 90 car that I ran as a fleet car in 2017 so highly that it has to be included here.

For the same reasons mentioned by John McIlroy in his greatest drives selection, the packaging is brilliant and makes the car genuinely usable – even as a three-door.

Equipped with VW’s 89bhp 1.0-litre three-cylinder turbo petrol engine, it was the up!’s maturity that wowed me. Here was a car costing £11,505 in three-door beats trim that could easily live with modern motorway traffic thanks to the flexibility that turbo engine gave it. 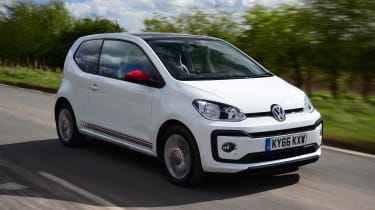 The ride was relatively comfortable, despite a super-short wheelbase, but that, allied to quick, precise steering, meant it was fun on country lanes. It was so narrow that you could pick your line through a corner without straying from your lane.

Refinement was excellent for a car costing around the same as an expensive holiday for a family of four, and it returned a true 50mpg-plus over eight months in my care without too much effort.

My car also had a few well chosen options that ramped these traits up to 11. Cruise control enhanced its motorway ability, AEB was fitted, and heated seats added a big-car feel.

But the compact dimensions meant it was simple to drive in town and a doddle to park. With my affinity for stripped- out track cars, the up! TSI ticked all the boxes for me as a car to live with. While it’s a surprising entry, it’s not without qualification.