The new Peugeot 2008 continues Peugeot's latest design trend, but has it the substance to become a class-leader?

Distinctive, beautifully built and packed full of tech, the 2008 has plenty of tricks up its sleeve to set it apart in a packed class. It’s roomy, cheap to run and good to drive, if not quite class-leading. However, a high price compared with rivals holds back its score. If that’s not an issue, then just make sure the ergonomics work for you.

This is the new 2008, a car that Peugeot hopes will continue its recent run of form. From the 3008 SUV to the 508 Fastback and its latest 208 supermini, Peugeot has managed to churn out a series of cars that offer not only style in abundance, but also the driver appeal to back it up.

Getting the 2008 right is perhaps more critical than any of the other cars before it. The compact crossover class is full of talented rivals - most notably from the brilliant new Renault Captur and our current class-leader, the Skoda Kamiq.

Like the 208, the 2008 sits on the PSA brand’s latest CMP small-car platform. It means that, uniquely in this class, the 2008 is available with petrol, diesel and full-electric powertrains. It also ensures the 2008’s structure is more rigid than its predecessor’s and, while it’s 141mm longer than before, is barely any heavier. 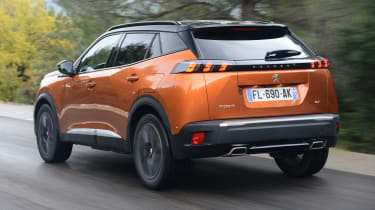 Which isn’t something you could say about the styling. Gone is the rather bland look of the old 2008, replaced with something altogether more daring. There’s clear inspiration drawn from the 208 and 3008, but the wild angles and big grille make it look a little more quirky.

Inside, the 2008 carries most of its layout over from the 208, and it’s a cabin which, in terms of both design and quality, puts most of its rivals to shame. There are a few beautiful details; the piano key shortcuts on the dash look and feel great, while some models get bright contrast stitching that add an extra splash of colour. There are lots of squidgy plastics, too.

The latest iteration of Peugeot’s i-Cockpit looks stunning. A 3D effect is created by layering two screens on top of one another, which means that things like the navigation icon and the speed reading appear to float above the other displays. The dials themselves are placed above – rather than through – a small steering wheel, so as with many other recent Peugeots, it’s really a case of ‘try before you buy’. Some buyers will love it, but depending on your height and your chosen driving position, it means that the top of the wheel rim could block a big section of the dials.

On the plus side, it’s very roomy inside; with a wheelbase that’s 65mm up on the 208 hatch’s, the legroom has increased noticeably. There’s plenty of foot room under the front seats, and headroom is pretty good, too. A 434-litre boot is above average for the class, at least until you factor in the sliding rear benches available on rivals like the Captur; that car will hold more stuff if you’re willing to give up some legroom.

Find a comfortable driving position and you’ll discover the 2008 is really quite smart to drive. It feels stable and precise through corners, and the ride does a good of filtering out nasty bumps. It’s not quite as forgiving as the Captur, but a little door mirror-induced wind whistle at motorway speeds aside, refinement is really impressive overall, too.

The 2008 comes with a choice of three petrol engines, one diesel and an electric set-up – more of which you can read in our full review of the e-2008. The 1.2-litre turbocharged petrol comes with either 99bhp, 128bhp and 153bhp – the latter of which is shown in our images. Regardless of which version you go for, it’s a great engine - smooth in its power delivery and fairly frugal, and while it’s thrummy at times, the noise is never unpleasant. We also tried the 128bhp version, and it’s the one we’d have; it’s more than strong enough in everyday driving. 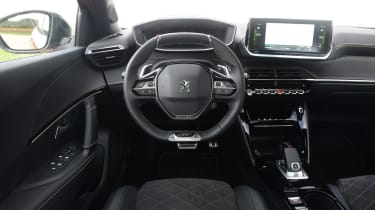 As with the rest of the Peugeot range, the 2008 will be offered in Active, Allure, GT Line and top-spec GT trims. Base models start from £20.150; though less well equipped, a base Skoda Kamiq costs £17,700. Move up the range, and a middling 2008 GT Line with the 128bhp engine and a manual gearbox costs £26,100. In contrast, the Renault Captur in S Edition trim and offering the same 128bhp costs more than £4,000 less. With each of those cars such capable cars in their own right, those differences are hard to swallow.