The new Peugeot 208 has already impressed us on foreign roads. Now we try eco supermini over here 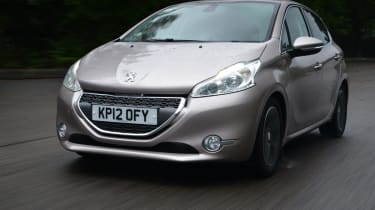 From the moment you set eyes on the new 208, you can tell Peugeot is on to a winner. It looks like a premium car, and that impression continues once you start driving. The refined, smooth engine is a perfect fit for the classy, well specced cabin. This all means a hefty price, but it’s no more than what you’d expect to pay for a well equipped Fiesta.

Thanks to our early drives on the European mainland, we already know that the 208 is the best small car Peugeot has produced in years. But now that it has arrived in the UK, we can set about finding the sweet spot in the model line-up.
This 1.6 e-HDi version has the makings of being the top pick, with 91bhp and a claimed 74.3mpg. The engine impresses on the road, with a smoothness that you don’t expect from a four-cylinder diesel supermini.
Acceleration won’t exactly set pulses racing, but the 12.2-second 0-62mph time feels quick enough in town. The stop-start system works seamlessly, too, and during our hour-long city test drive the engine was switched off for a total of 18 minutes. Other set-ups wouldn’t have come close.

It’s this clever system that helps reduce the 208’s running costs. CO2 emissions of 98g/km are low enough to allow the Peugeot to be exempt from road tax, and we achieved real-world economy of around 60mpg during our test drive. Motorists looking for even lower running costs can always opt for the 1.4 e-HDi, which officially claims 87g/km and 83.1mpg.
However, even with an eye on efficiency the 208 e-HDi is plenty of fun to drive; far better than the 207 it replaces. It all starts with the tiny steering wheel, which gives a real sense of agility. Unless the speeds are really high, the 208 flows nicely through fast corners with decent grip and only a limited amount of body roll.
It’s only as you fully explore the car’s limits that you find it can’t quite match Ford’s Fiesta for outright ability and driver involvement. One aspect that is particularly to blame is the five-speed manual gearbox, which feels a bit vague.
On the plus side, the 208’s suspension does a good job of isolating the driver from rough roads. The only hint of firmness comes when travelling over drains and potholes, at which point a noisy thud enters the cabin.
This 208 1.6 e-HDi in Allure specification costs £15,845 – a price tag which places the 208 at the most expensive end of the supermini market, right up there with the best-selling Fiesta.
Thankfully, the stylish cabin feels worth every penny; it comes with a colour touchscreen, sports seats and some gloss black and brushed chrome inserts.
Passengers are well catered for, too. Even though this car is more compact externally than the 207, there’s actually 5cm extra rear legroom thanks to redesigned seats which free up space.
In the boot there’s an extra 15 litres of room, too, which now takes the load capacity to a competitive 285 litres with the rear seats up.
Share this on TwitterShare this on FacebookEmail