The Peugeot 208 Style special edition is affordable and stylish, but it's pipped at the post by the Ford Fiesta overall 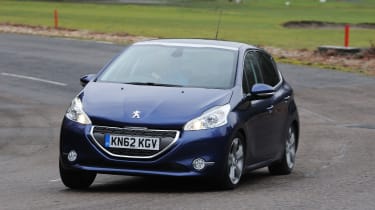 As the name suggests, the 208 Style is an attractive alternative to the Ford Fiesta, VW Polo and Renault Clio. It's cheap to run, has plenty of kit and a decent drive, but it can't quite match the class best for driving enjoyment and interior space.

The Peugeot 208 Style is a good looking, well-equipped and cost effective supermini from the French brand. And a stern rival to the Ford Fiesta, Volkswagen Polo and Renault Clio.

The 208 Style is available in three and five-door bodystyles and has the choice of the efficient three-cylinder 1.2-litre VTi petrol engine – which made its debut in the 208. It puts out 81bhp and 118Nm of torque so it’s a lively little unit. While the 1.4-litre and 1.6-litre HDi diesel engines will be familiar to owners of other Peugeot models.

The Peugeot 208 Style is a special edition and so it comes equipped with a host of standard kit including electric windows, cruise control, rear parking sensors, sat nav with DAB and Peugeot’s Cielo panoramic glass roof to name a few. Bluetooth and a USB connection are also standard on the 208 Style. 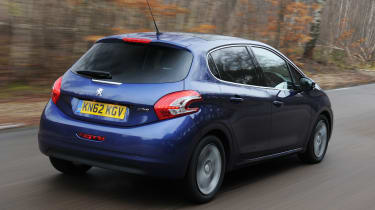 But you’ll get the same well-built and stylish interior in the 208 Style as with other models. Plus enough room to accommodate five adults at a squeeze. The Peugeot 208 Style also rivals the best in the class for boot space, and there’s plenty of useful storage in the cabin too.

The Peugeot 208 still manages to stand out from the supermini crowd thanks to its daring styling, while both three and five-door models get the same crisp lines and neat detailing. 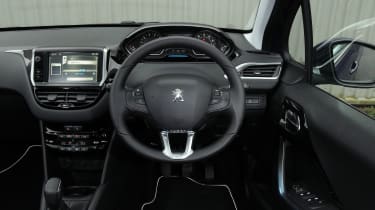 Inside the Peugeot 208 Style, it’s clear the designers have dared to be different with its dash layout - unfortunately the end result is a little hit and miss.

While the touchscreen infotainment system and switches for the air conditioning are handily placed and straightforward to use, some of our testers found that the high-set dials were obscured by the small, thick-rimmed steering wheel.  And while both the steering wheel and seats have height adjustment it isn’t easy to find a perfect driving position where you can see all the dials.

Happily, the interior quality of the Peugeot 208 Style isn’t that different from its premium brand rivals. Raised dash dials and chrome-ringed controls put the Peugeot 208’s cabin on par with the Audi A1, plus the seven-inch touchscreen on the centre console comes as standard.

The Peugeot 208 Style is loosely based on the same underpinnings as the old 207, which means it’s a composed and capable performer on the road. 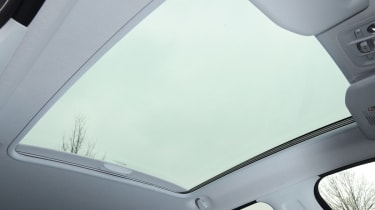 While it doesn’t feature the most sophisticated suspension set-up, the Peugeot 208 benefits from quick steering, strong grip and decent body control. The electrically assisted steering is a little lifeless and the standard stability control is too eager to cut in, but the Peugeot feels more agile than rivals such as the Renault Clio and Kia Rio.

Traditionally, Peugeot models have been famed for their soft and quiet ride – and overall the 208 does a good job of upholding this reputation. It feels a little firm at low speed and can crash into potholes, but once up to speed the Peugeot soaks up bigger lumps and bumps.

The petrol 208 Style is powered by Peugeot’s three-cylinder 1.2-litre PureTech engine with 81bhp. It’s a lively and enthusiastic engine and will return a healthy 62.8mpg. The five-speed manual gearbox is a bit vague and notchy and if you wanted an auto you’ll be disappointed, as an auto option isn’t available on the 208 Style.

Diesel fans can choose between the slightly strained and lethargic 67bhp 1.4-litre HDi and the more muscular 91bhp 1.6-litre e-HDi, which is fitted with the brand’s excellent stop-start system 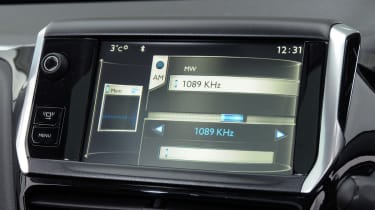 Peugeot has long struggled to shake off its reputation for flaky quality and poor reliability and while the 208 certainly feels more solidly built than its predecessor, some owners have reported electrical glitches, particularly with the infotainment system.

On the plus side, most of the mechanicals are tried and tested. While the 208’s durability will be a concern, its safety credentials are top-notch as all cars get six airbags, a speed limiter, stability control and five star Euro NCAP crash test rating.

The Peugeot 208’s 285-litre boot is smaller than those found on the Ford Fiesta and the Toyota Yaris. Plus, it’s hobbled by a high load lip. However, boot space increases to 1,076-litres when the rear-seats are lowered.

Although the Peugeot 208 three-door’s rear seats offer as much room as the five-door’s, headroom is more limited. Rear seat occupants in the Peugeot 208 should enjoy similar amounts of head and legroom as they do in the Ford Fiesta, but you’ll struggle to fit three adults across the narrow rear bench. 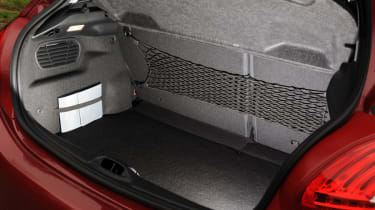 However, the cabin boasts plenty of useful storage, including a number of cup-holders, decent door bins and a deep cubby ahead of the gearlever. On the downside, the large fusebox takes up more than half of the glove compartment’s storage capacity.

On paper, the Peugeot 208 makes good financial sense thanks to its range of petrol and diesel engines.

All the 208 Style diesels are road tax-free as they return more than 74mpg and emit less than 100g/km of CO2. The 1.4 HDi version promises low fuel consumption and emissions but have significant price premiums over the efficient 1.2-litre three cylinder VTi petrol model, so unless you plan to rack up in excess of 18,000 miles, it’s best avoided. Those after more power should choose 1.2 VTi, which does 62.8mpg and emits just 104g/km of CO2.

Stop start makse the e-HDi diesel model the most efficient in the range, returning 78.5mpg and emitting 95g/km of CO2. Once again, though, this model is best suited to high mileage use.

Better still, our experts predict the Peugeot 208 Style will retain 41.1 per cent of its value after three years – slightly more than the Ford Fiesta.

Servicing, general maintenance and insurance costs should be very affordable. Peugeot even offers its Just Add Fuel finance schemes, which for a competitive monthly outlay cover all costs apart from what you put in the tank.