Can lion challenge Nissan Qashqai with its take on the hatch, SUV and MPV crossover? 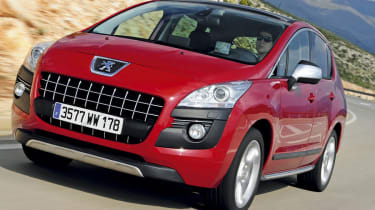 The 3008 is an intriguing alternative to a regular family hatchback. It offers respectable practicality with a neatly styled cabin and a well rounded driving experience. But in trying to be a jack-of-all-trades, it ends up being a master of none. It lacks the flexibility of an MPV and the off-road ability of an SUV, and isn’t as spacious as estates such as Peugeot’s own 308 SW. It’s expensive, too. Still, the 3008 is a likeable family car and, in diesel form, won’t cost owners much to run.

Take a look at Peugeot’s vision of future family motoring. This is the 3008, an all-new model which is said to combine the best bits of an MPV, an SUV and a hatchback.

If that sounds familiar, it’s because Peugeot isn’t the first to try it. Nissan’s Qashqai has proved that there are plenty of buyers who want an alternative to the traditional hatch. But can the latest Lion follow in its successful footsteps?

Unlike the Qashqai, the 3008 doesn’t replace a regular hatchback model. Instead, it will sit above the 308 and be priced from £16,000. With its chrome mesh grille, oversized headlights and chubby wheelarches, the newcomer certainly stands out. Inside, the dash wraps around to meet the high centre console, so while the driving position is raised, it feels cosy and car-like.

A vast windscreen and glass roof mean the cabin is light and airy. In the back, there’s space for three adults, while the boot gets a triple-height floor and split tailgate. At 1,604 litres with the seats folded flat, it’s big, but still smaller than the 308 SW’s. However, you can’t remove the rear seats, nor can you slide them back and forth.

Despite its SUV billing, the model isn’t four-wheel drive. To improve all-terrain ability, there’s optional Grip Control, but the new car isn’t really suited to off-roading. Under the bonnet, buyers can choose from normally aspirated and turbocharged 1.6-litre petrol engines, plus 1.6 and 2.0-litre diesels. A hybrid arrives in a few years.

We drove the 1.6 HDi. It’s gruff but frugal, returning 55mpg. Despite its tall stance, the car doesn’t roll much and grips strongly. Ride comfort also impresses, but the brakes are mushy and the steering vague.

The fact the 3008 isn’t a regular hatchback is its biggest virtue, because as an MPV or an SUV, it doesn’t quite convince.

Rival: Nissan Qashqai The Japanese crossover strikes a great balance with its chunky SUV styling, precise driving experience and well built cabin. It’s not as roomy inside as the 3008, but is keenly priced and there’s a seven-seater version.