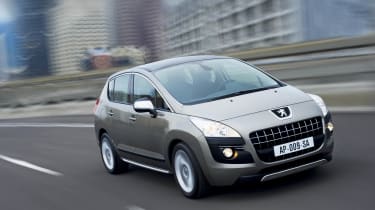 The 1.6-litre turbo petrol 3008 makes a decent case for itself thanks to its responsive and refined performance. But there’s no getting away from that fact that the diesel makes more financial sense. That said, the clever Dynamic Roll Control makes for slightly tidier handling. The Peugeot is worth a look if you’re in the market for something different.

If you’re looking for a versatile Peugeot, you’re spoiled for choice these days. Not only does the French firm have the cavernous 308 SW estate and Partner Tepee, but now the 3008 has joined the range.

We drove the new MPV/SUV crossover in 1.6-litre diesel trim last week, and apart from some reservations, came away impressed. So, how does the 150bhp 1.6-litre turbo petrol model shape up?

Well, it’s not lacking in pace. It’s three seconds faster than the oil-burner from 0-60mph, with a time of 8.9 seconds. Plus, in-gear performance is strong, too, with lots of torque (240Nm, which is similar to the diesel’s figure of 260Nm) resulting in real flexibility. What’s more, it’s also quite smooth.

Predictably, the petrol model loses out at the pumps – 38.1mpg is impressive, but no match for the diesel’s 55.3mpg. Emissions of 176g/km mean you’ll have to allow an extra £55 a year for road tax, too. In corners, the petrol car handles better, thanks to the Dynamic Roll Control system. It’s fitted to the 1.6-litre petrol and top-spec 2.0 diesel, and effectively links the rear dampers to help reduce body roll. Factor in a comfortable ride and you have a tidy driving experience.

Elsewhere, the 3008 gets a high-quality Audi-inspired wraparound dashboard, decent passenger space, a handy three-height boot floor and split tailgate. However, while it’s flexible, it’s not as versatile as a people carrier, and despite the option of a clever traction control system, it lacks the all-terrain ability of an SUV.

Prices are to be confirmed, but a mid-spec 1.6-litre turbo should cost around £18,000 – the same as the 1.6 diesel. The latter is more economical, though, and looks a better buy.