It starred on a stag, and got us to the church on time, so do we look forward to a long life with crossover? We do! 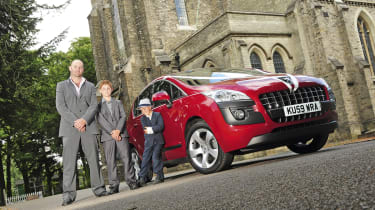 People often compare marriages to journeys, and our long-term 3008 has been busy attending plenty of weddings – and the odd stag weekend – this summer. So how has it coped?

Perhaps the most impressive performance was shifting four of my mates to a stag do on the Norfolk Broads. As I usually transport only my young sons, it was good to find there was enough room for bigger-bodied blokes in the back. The lack of complaints about legroom on the 100-mile journey from London was a real bonus.

Baggage was not a problem, either. Five weekend rucksacks fitted easily into the boot – we even had space for a few cans of lager! The 3008’s sound system stood up to the scrutiny of my technology-loving mates, but the integrated sat-nav let me down yet again with a lack of information on the map and a refusal to accept a postcode entry.

In fact, I’ve fallen out with the system so badly she won’t even talk to me any more. I must have inadvertently turned off the audio instructions, but the set-up is so user-unfriendly that I can’t work out how to switch them back on again. As with most drivers, I don’t want to spend time leafing through a manual to get it working efficiently once more.

On the bright side, the fully laden Peugeot’s handling was impressive. Despite the extra weight, some of the Broads’ bendy B-roads were still great fun. If anything, the 3008 felt more planted than usual, as the steering can seem a little vague at times.

Maybe this is because our model isn’t fitted with the firm’s £300 grip control option. It adds intelligent traction control to the front-wheel-drive hatch to aid the driver on those windy lanes. Meanwhile, when it comes to wedding transport, we all like a little style and comfort – and while the 3008 is no Rolls-Royce, in my book its classy interior is a real strength. It looks great, with loads of room and visibility.

It is jam-packed with thoughtful touches, too. This summer the rear blinds have been helping keep the sun out of my children’s eyes, while the air-conditioned cubby in the centre console has provided cooling drinks to chill them out.

My youngest son Harry is less impressed with the alarm that informs me if he has popped his belt, because he gets a swift telling off whenever he does. The child safety features of the car are as good as I’ve seen in terms of clarity and simplicity.

The 3008’s other great strength is the boot layout. It allows you to raise or lower the floor level to create different storage compartments. And it provided the perfect place to transport my suit and my wife’s finest dresses to avoid creases!

It’s also a great place to store summer stuff. I keep a bucket and spade, blanket plus swimming costumes and towels under the floor at all times, just in case we need them. You never know where you’ll end up if you are out and about and the sun is shining.

So what would I change? Very little, so far. My 3008 has given me hardly any trouble and the model is becoming increasingly common on the roads. Peugeot has had a rough time in our Driver Power surveys over the years, but if it keeps producing machines such as this and the Auto Express award-winning RCZ coupé, the brand will enjoy a long and happy marriage with the British car-buying public.

“While 3008 is great on the inside, I’m still unsure about the design. There’s a hint of Porsche Cayenne about the nose – but then that car isn’t really considered a looker.