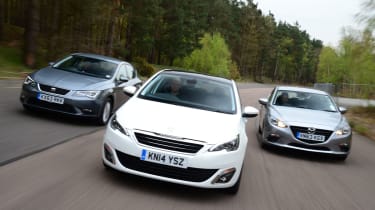 Downsizing in the name of efficiency is all the rage, but it’s taken Peugeot until now to launch a small-capacity turbo engine for its recently launched 308. The new e-THP unit is available with 108bhp or 128bhp, as tested here. Both versions emit less than 110g/km of CO2 and promise to return more than 60mpg.

Mazda, meanwhile, has added a new 1.5-litre SkyActiv engine to its superb 3 hatch. It’s not as powerful as its turbocharged rivals, but it promises strong throttle response, driveability and low running costs.

Setting the benchmark for our two newcomers is our reigning car of the year: the SEAT Leon. Fitted with a 1.2-litre TSI unit, it delivers performance, economy, sharp driving dynamics and value for money.

Click the links below for the full verdict on each car... 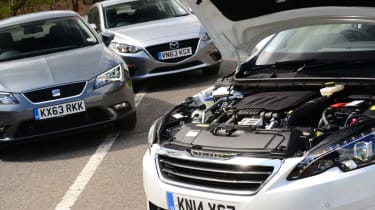 Peugeot’s 1.2-litre three-cylinder engine is given a boost courtesy of a turbo and stop-start. As a result, it’s 15 per cent more powerful and 25 per cent more efficient than the 1.6-litre unit it replaces.

The SEAT has a more traditional four-cylinder with less power, but the Leon’s lower kerbweight means strong performance. However, the Mazda avoids turbocharging with its “right-sized” 1.5-litre, which is smooth but lacks punch. 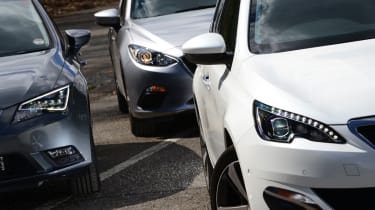 Both Peugeot and SEAT have adopted the latest LED headlamp tech. Yet while this is available on Leon SE models and above, you’ll have to fork out for the 308 Allure if you want the brighter lights.

Mazda uses traditional halogens in the entry-level SE, but SE-L and Sport get standard-fit xenons.

Our trio will be on most company car lists, but the SEAT rates well here. It’s CO2 emissions are higher than the 308’s, yet a lower price means there’s little to separate the two on BIK. The Leon’s 46.4 per cent residuals are strongest. 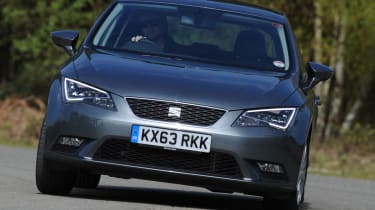 The SEAT Leon’s reign at the top of the family car class continues. In 1.2-litre TSI guise, it offers a compelling blend of performance, quality and refinement. Factor in sharp handling, plenty of kit and strong residuals, and it’s a package that’s hard to beat. 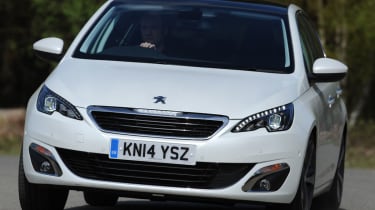 The runner-up spot goes to the Peugeot 308. It’s not as fun to drive as its rivals, but it’s hard to ignore the French model’s punchy engine, low CO2 emissions and long kit list. It’s attractively styled, inside and out, and better built than previous Peugeots. 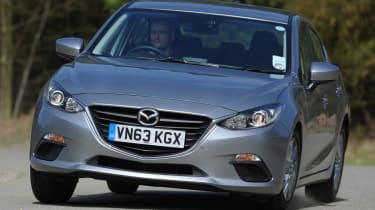 Third place will be a bitter pill for Mazda to swallow. While the 3 is neatly styled, well built and enormous fun to drive, it’s undermined by sluggish performance and higher running costs. Space and practicality are also a letdown.