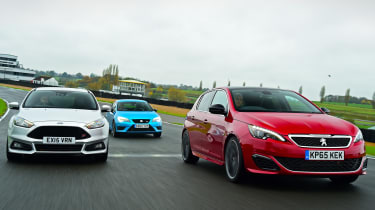 For years Peugeot’s GTi badge ruled the hot hatchback sector. Its 205 GTi is a truly iconic car, although after its demise the brand launched a string of underperforming lukewarm models that failed to catch the imagination.

But 2015 marked the start of Peugeot’s resurgence with its focused 208 GTi by Peugeot Sport supermini, and the company is aiming to upscale that car’s mouthwatering recipe for its latest effort: the 308 GTi. Based on the five-door-only 308, it blends practicality and performance. With the RCZ R coupé’s 1.6-litre four-cylinder turbo under the bonnet, plus a big brake upgrade and a chassis tuned by Peugeot’s motorsport arm, it promises to combine driving thrills with space for the family and their luggage. But it’s got a glut of talented rivals to take on if it wants to top the class – and two of the toughest are the Ford Focus ST and our favourite hot hatch, the SEAT Leon Cupra 280.

The ST was updated late last year, and now Ford-endorsed tuning arm Mountune has upped power by 10 per cent. The Leon is as appealing as ever, and like all our test cars, has a rip-roaring engine and a manual box. But which comes out on top?

Sport modes on the Peugeot and SEAT boost throttle response and, crucially, noise. The Leon sounds better than the artificial noise piped through the 308’s speakers, even though the exhaust whoosh is appealing from outside. 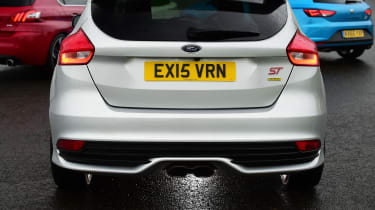 The Ford’s naturally enhanced engine roar is the best – it builds from a deep rumble to a high-rev warble and fits the car’s character.

Only the Leon Cupra is available as a three-door, but these five-doors all have to seamlessly mix performance and practicality. 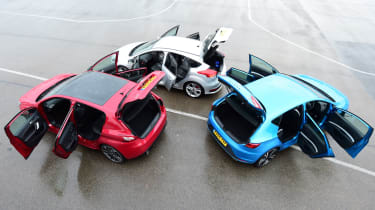 The SEAT does this best, with the neatest blend of comfort, quality, performance and space. The 308 is the softest, while the Focus feels eager all the time.

All three cars look great, with styling pitched well for everyday use. The sharper Ford is more overtly sporting, while the 308 has rounded edges and subtle visual extras. SEAT’s designers have cleverly enhanced what was already there with a few tweaks. 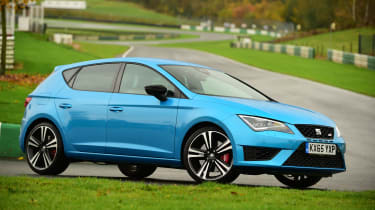 It’s marginally more expensive than its rivals and not quite as efficient, but the Leon Cupra is still our favourite family hot hatch. Here, performance matters more than practicality, and the car still has the edge. The extra running costs are easier to stomach when the SEAT delivers so much on every front. It’s exactly what a combination of thrilling driver’s car and practical transport should be. 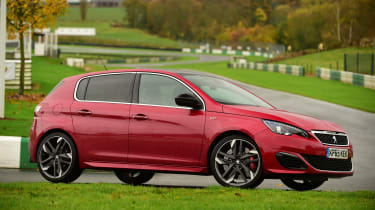 Peugeot is on a roll. This GTi takes all the excitement of the smaller hot 208 and mixes it with the classy 308 body, resulting in a strong package of performance, driving thrills and refinement. It adds low running costs and practicality to its long list of talents. It’s just not as exciting or as capable as the Leon, and despite a bigger boot, isn’t any more practical. 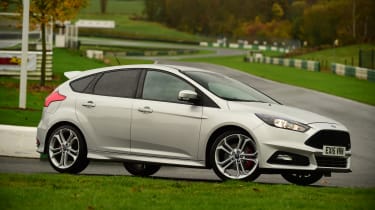 Adding the Mountune performance pack has improved the Focus even further without introducing any compromises. For the money, we would definitely recommend it. However, the standard car has too many flaws to win this test as a usable, everyday hot hatch. The boot is too tiny to ignore and the firm ride could get on your nerves. Still, as a driver’s car it’s up there. 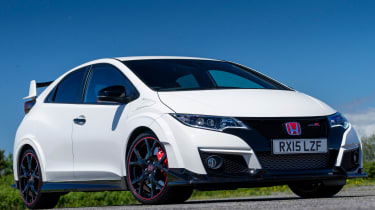 The looks are divisive, but the new Civic Type R promises more performance for just a bit more money than our test trio. Just be warned: it’s even more hardcore than the Ford, with a very firm ride. Plus, interior quality is lacking. 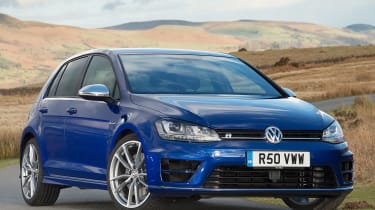 If you fancy more security this winter, second-hand 4WD Golf Rs are going for a song. This price buys a new car with delivery mileage. It still looks chunky, while the solid drivetrain should put the power down even more effectively.