The 5008 is comfortable and decent to drive, with punchy petrol and diesel engines

The Peugeot 5008 isn’t as sharp to drive as a Skoda Kodiaq, but this family SUV does deliver lots of comfort. Its softer suspension set-up and long wheelbase mean the car smothers worn tarmac, and the good news is that this doesn’t come at the expense of body control, because it keeps movements in check with a refined, fairly plush feel.

However, there is a downside to this suppleness, because the Peugeot does suffer some roll in corners. To make matters worse, the small steering wheel makes it easy to turn too quickly and upset the car’s balance. Still, there’s a good level of grip given the concessions to comfort. 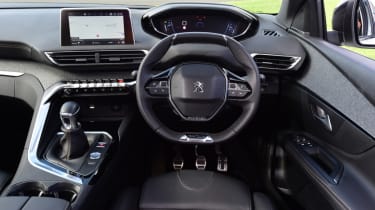 At least the driving position is good, as you can see the dials over the top of the steering wheel, unlike the i-Cockpit set-up in some older Peugeot models. It’s comfortable to sit in thanks to the quality seats, and forward visibility is good, although rear visibility is limited and you’ll need to rely on the camera systems to park easily.

There are manual and automatic gearboxes available, and both are fine options: the manual is much smoother than the one found in the Grand C4 SpaceTourer, and the EAT6 automatic shifts nicely as well. There’s no four-wheel drive model, but some versions have Mud & Snow tyres and Grip Control – effectively an advanced traction control system that can work on the driven wheels individually to maximise grip.

A big, seven-seat SUV with a 1.2-litre three-cylinder petrol engine might sound like a recipe for slow progress, but the unit’s turbocharger helps to deliver maximum torque of 230Nm from just 1,750rpm, which means the 5008 actually serves up some pretty decent performance.

Although it’s not as powerful as some rivals, the Peugeot is light, so it doesn't have as much weight to lug around. Nevertheless, when we tested this engine, it didn't prove very quick, accelerating from 0-60mph in 11.1 seconds, and it wasn’t helped by the six-speed manual box’s woolly shifts. Still, it matched a Skoda Kodiaq 1.4 TSI 150 in nearly all of our in-gear tests.

As a result the Peugeot doesn’t feel underpowered, and it’s much more flexible than the 1.6 DiG-T petrol-powered Nissan X-Trail. It’s impressively refined, too; under load there’s a three-cylinder growl adding some character, but it’s not a harsh tone and it settles down at motorway speeds. 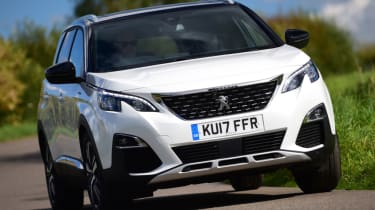 The 1.5 BlueHDi diesel with 128bhp and 300Nm of torque is set to maintain the old 1.6 BlueHDi's mantle as the best-seller of the range, offering the best economy figures. The 2.0-litre BlueHDi comes with 178bhp, and is available only in GT Line and GT trims with the EAT8 auto gearbox as standard.