Plenty of space inside, but visibility isn’t great

The Peugeot 5008 is a seven-seater (if you only need five seats, go for the cheaper 3008) and just about matches up with its main rivals for space, while Peugeot is proud of the fact that the 5008 SUV has more rear seat space than the MPV version it replaced. It’s easier to get in the back seats than in a Renault Grand Scenic, but there’s a bit less space in the third row.

It’s not the best for visibility, as the exterior design has caused a lot of rearward blind spots. The rear window is small and feels far away, so the 5008 isn’t the easiest car of its type to drive. A Citroen Grand C4 SpaceTourer is much better in that regard.

The Peugeot 5008 is just over 4.64m long and 1.84m wide, which means it’s a little smaller than the Skoda Kodiaq - it’s slightly shorter too, at 1.65m high. The Peugeot’s wheelbase is longer than the Skoda’s, at 2.84m, although legroom in both is plentiful. One advantage the Skoda has is more headroom in the back.

In the middle row there are three individual seats, all with Isofix child seat mountings, and they slide and recline for maximum comfort. The seat bases are hard, but thanks to the 5008’s long wheelbase and flat floor, there’s a huge amount of knee room. Headroom is good, too, although the panoramic roof (standard on GT Line Premium) robs middle seat passengers of some space.

Climbing into the third row is easier than in the seven-seat Skoda Kodiaq, because the middle row pushes further forwards. The rearmost seats are primarily designed for kids, but adults can sit there as long as the row in front is slid forward. Both chairs fold into the floor when not in use, and are covered by lift-up panels. If you need more under-floor storage, the seats can also be removed. 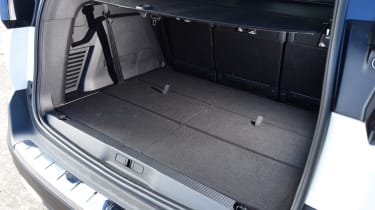 As in most people carriers, there's not a huge amount of boot space in the back of the 5008 with the third row up, with 167 litres offered. In comparison, a Skoda Kodiaq has 270 litres, but a Nissan X-Trail is only 135 litres in capacity. Fold the Peugeot's seats down and you’ll find 952 litres of space, which is much more than the Kodiaq’s 720 litres. You can also take the rear seats out completely – they are comparatively light when compared to some rivals – and that means you’ve got a massive 1,060 litres of space.

Fold the second row of seats down and the 5008 has a total of 2,150 litres of space, which also beats the Kodiaq’s 2,065-litre capacity. It’s impressive, and means the 5008 is one of the roomiest cars in its class.