One of the best interiors of any seven-seater car

This second-generation 5008 is radically different from its predecessor, with Peugeot repositioning the car as a full-sized seven-seat SUV to meet the growing demand of buyers for off-roaders.

As part of that transition, the car has moved on to the scalable EMP2 platform that underpins the smaller 3008 and cars from sister brand Citroen, such as the Grand C4 SpaceTourer MPV

The upright grille, detailed headlights and tail-lights, the steep windscreen, raised ride height and hidden C-pillars all give the 5008 a distinctive look, and it’s a similar design to the closely-related 3008. Cars like the Skoda Kodiaq have a more traditional look, but the 5008 certainly has a distinctive style.

On the inside, it’s all good news, as the 5008 has the same top-quality interior as the 3008, making it one of the best cars in its class to sit in. The dashboard wraps around the driver, incorporating Peugeot’s infotainment system on an 8.0-inch touchscreen in the centre.

The small steering wheel and high-mounted instrument cluster remain as well, and you get Peugeot’s latest 'i-Cockpit' display, with a 12.3-inch digital screen behind the wheel. Like Audi’s Virtual Cockpit, it means you can change the layout of the dials, choose what is displayed (and how) or show the sat-nav instructions in front of you.

Apart from some lower-quality materials lower down in the cabin, and the fiddly touchscreen controls for the air-con, the 5008’s interior is one of the best in its class. It’s great-looking, high quality and functional. What more could you ask for in a seven-seater car?

Peugeot’s 12.3-inch dash display and eight-inch touchscreen deliver plenty of tech. All models get these screens, as well as Apple CarPlay and Android Auto, while Allure trim upwards features sat-nav with three years of live updates. This adds features such as traffic info, local search and weather forecasts. 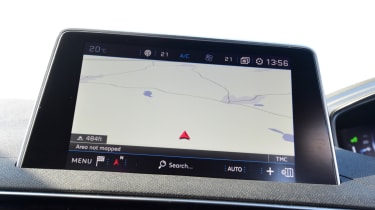 Voice control is included, but the 5008’s piano key-style buttons are good to use. However, they also highlight one of the system’s shortcomings: although you can go directly to the climate screen, there are no physical controls to alter settings, so you have to come out of the nav or media displays. Given the set-up can sometimes lag, this can be frustrating, but you can still see the nav on Peugeot’s improved i-Cockpit display.

The graphics are sharp and the system is easy to use, with strong smartphone connectivity giving you plenty of options. Both screens also look great and are nicely integrated into the cabin, making it a slick system.