The Peugeot Partner is a smooth-riding and economical van, but it isn't as refined or well-equipped as top rivals 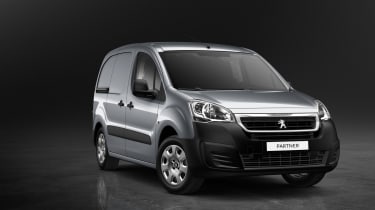 The Peugeot Partner sits in the middle of the company's comprehensive commercial vehicle range, between the tiny Bipper and the mid-sized Expert. It's the sister van to the Citroen Berlingo and has plenty of opposition, from the likes of the Fiat Doblo, Ford Transit Connect and the Volkswagen Caddy.

The Partner was refreshed in 2015, and benefitted from a front-end facelift plus improved equipment levels and crucial Euro 6 compliant engines.

Trim levels start at S, moving through SE and Professional grades. These are all offered in a choice of L1 and L2 long formats. Curiously the two body lengths sit on the same length wheelbase, so the long L2 model stands out with a longer rear overhang.

The L2 version is also offered with extra seats - a five seat crew van, and a Partner Tepee people carrier. In shorter L1 form, the Partner can handle payloads of up to 850kg, while the longer model makes do with a 750kg payload. 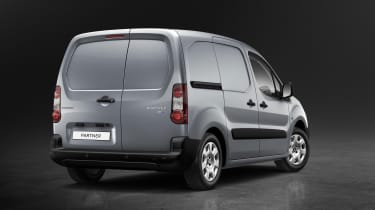 In the majority of Partners power comes from the familiar PSA Peugeot Citroen 1.6 HDi diesel. This is offered in 75bhp and 100bhp guises, with the 100bhp variants benefiting from Peugeot's latest Euro6 compliant BlueHDi technology plus a stop-start system to save yet more fuel. There's also a 1.6-litre VTi petrol engine packing 98bhp, but few van buyers take Peugeot up on that offer.

Whichever engine you go for, power is sent to the front wheels through a five-speed manual gearbox. However, drivers wanting the convenience of an automatic can add the six-speed electronically controlled Peugeot ETG automated transmission as a £500 option.

In addition, those choosing the more powerful diesel vans can order Peugeot’s ATV grip control package. This optional extra is designed to give the Partner mild off-road ability without the fuel costs of a full-blown four-wheel-drive system. It brings an electronic differential lock with four modes – for dry roads, mud, snow and sand – as well as raised suspension and mud and snow tyres.

Drivers who don’t venture beyond the city limits might also consider the all-electric Partner. This Renault Kangoo Z.E. rival is based on the shorter body, promises a range of 106 miles from a single charge and has a payload of 695kg.

The greenest Partner is the L1 model with the 100bhp BlueHDi diesel engine and the EGT automated manual gearbox, it gets an impressive 68.9mpg on the combined cycle and CO2 emissions of 108g/km. Go for that range-topping engine with a manual gearbox and the mpg figure falls slightly to 67.3mpg. The 75bhp diesel, meanwhile, returns 56.5mpg. Going for the longer L2 model has no effect on fuel economy but the weight of the extra seats in the Crew Van sees miles per gallon drop.

The Partner Electric sets the Peugeot van apart in the light commercial market: this claims to cover 106 miles on zero emissions battery power before needing to be plugged in. The Partner Electric gets a 3-year/100,000 mile manufacturer's warranty as standard but this excludes the battery and drivetrain. Those components are covered by a separate warranty of 5 years and 40,000 miles.

Diesel Partner vans are serviced every two years or 12,500 miles, while a low insurance group – ranging from 1E-4E – adds to the financial appeal. There's a 3-year warranty on all models with internal combustion engines with the first two years being full manufacturer warranty and the final year being covered by the dealer with a 100,000-mile limit. 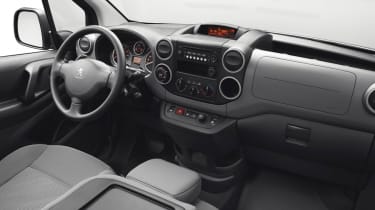 Unlike some rivals in this market, Peugeot uses the same wheelbase for the regular (L1) and extended (L2) versions of the Partner. That means the L2 model looks a bit ungainly at the rear, where the body overhangs the rear axle. And as the body weighs more on the L2, this has the effect of reducing the payload. As Peugeot doesn’t offer a high-roof Partner, load volumes are restricted to 3.3 cubic metres in the L1 and 3.7 cubic metres in the L2.

In comparison, the Fiat Doblo Cargo and identical Vauxhall Combo provide 3.4 cubic metres of space in short-wheelbase guise and 4.2 cubic metres with a long wheelbase. Both vans are also available with a high roof, which boosts capacity to up to 5 cubic metres. That’s not to say the Partner doesn’t make decent use of its dimensions: it can be ordered with a Multi-Flex passenger seat that splits and folds, with a cage bulkhead also folding around the driver. This extends the length of the load area beside the driver’s seat, and increases volume to 3.7 cubic metres in the L1 and 4.1 cubic metres in the L2. However, as there’s no solid bulkhead, drivers will have to put up with a fair amount of noise in the cab. There's also an optional rear roof flap that let's you carry a long ladder by sticking it out of the top.

The maximum payload is 850kg for the L1 model or 750kg for the L2. That's reasonably competitive against most rivals but the compact van sector's load-carrying king is the Fiat Doblo Cargo, which can carry over 1,000kg. Access is via the asymmetrically-split rear doors - it's only when you step up to the SE spec that you get a sliding side door. The load length is 1,800mm and the width between the wheelarches is 1,230mm so even the L1 can get 2 europallets inside. 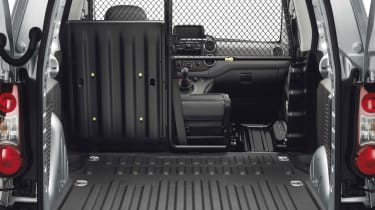 Peugeot has an extra dimension in the Partner with its ATV Grip Control package. Some van users will find it a cheaper alternative to a 4x4, with its raised suspension and grip-boosting electronic differential lock. Mud and snow tyres are also included, which could make the £600 option look decent value to van drivers who face the expense of switching from summer to winter tyres in the autumn and back again in the spring.

Safety was improved on the Peugeot Partner with the 2015 update, and all of the key features now appear on the standard spec list including ESP stability control. You only get a driver's airbag as standard with side airbags and one for the front passenger available on the options list. Also on the standard spec sheet are a ladder-frame bulkhead behind the driver and hazard lights that come on under hard braking. On the security front, there's central locking with deadlocks on all models.

There are more advanced safety systems available on the Peugeot Partner too. Peugeot has added Active City Brake which can apply the brakes automatically if an impending collision is detected at speeds of up to 20mph. Installing this lowers the insurance group of the van and so cuts insurance premiums. Parking sensors and a reversing camera also appear on the options list.

Any major reliability problems are likely to have been ironed out by now, as the Partner has been on sale for some time. The durability of the 1.6-litre diesel engine has proven in other PSA Peugeot Citroen models, while the van’s simple interior stands up well to heavy commercial use. 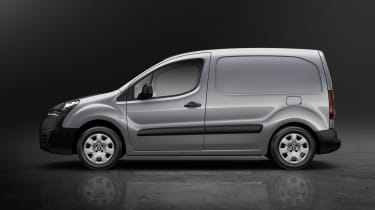 Performance from the Partner's diesel engines is decent rather than spectacular. The 75bhp 1.6 HDi engine pulls reasonably well, even when the Partner is fully laden. The van can become noisy and strained at motorway speeds partly due to the manual gearbox only having five ratios and the lack of a more substantial bulkhead.

If you're going to be doing lots of motorway travel, the stronger 100bhp BlueHDi engine is a worthwhile investment - but it's still not what you would call quick. There's a 101mph top speed compared to 94mph in the entry-level 75bhp model and 0-62mph takes 14.5s instead of a laborious 17.6s. Most rivals offer a more powerful engine with around 120bhp at the top of the range so high mileage operators ad private buyers might be put off.

Where the Partner does excel is in the ride comfort it serves up. Whether there's a load on board or not, this is a very smooth-riding van. The softness in the suspension does produce a little more body roll through the corners than in the Fiat Doblo, VW Caddy or Ford Transit Connect, but that's a compromise that many will happily make.

The smooth EGC six-speed automated manual transmission is well worth considering, although it’s an expensive option, at £500 on the top-spec Partner. Plus, the Partner Electric delivers silent, zero-emissions running, although the claimed 105-mile range will obviously limit its appeal for some drivers.

The cab in the Partner will be a little cramped if you're much over six-foot tall, the limited seat travel and narrow footwell can make long trips uncomfortable. If you go for the double passenger seat, the person sitting in the centre is likely to be very cramped, as the dash-mounted gear stick restricts knee room. Still, the set-up is worth specifying for the extra seating flexibility it provides over short journeys and the storage space increase.

Controls are light and logically arranged for the most part, but the electric window switches are mounted on the dashboard rather than on the doors where you expect them to be - and the optional USB phone charging socket is hidden away in the passenger footwell. 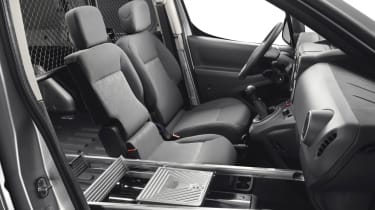 Storage options are plentiful, with a covered dash-top box ahead of the driver and a deep recess on the passenger side, plus door pockets and the horizontal bottle holders in the dashboard. Places to put larger items are harder to come by and that's another area where the optional double passenger seat is useful and it comes with a flip-up base that hides a larger storage area.

The S models are fairly basic but you do get a CD stereo, central locking, electric windows and electric mirrors. Move up to SE and there's cruise control with a speed limiter function as well as that Multi-Flex passenger seat and a sliding side door for the load area. On Professional models there's a neat touchscreen control console, DAB radio and a TomTom sat-nav with a separate screen.

(Width is body width at widest point, width with mirrors is 2,112mm)