Our coupe is blessed with many talents, but it's no match for Jaguar's sensational new XKR-S. Or is it? 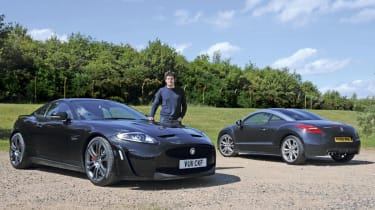 On the surface, it’s an unfair comparison – one of the coupés on this page is priced at nearly £100,000 and powered by a 542bhp 5.0-litre supercharged V8. The other costs a quarter of this and has half the number of cylinders. And less than half the power. No contest, right? That’s what I was thinking as I made my way to Jaguar’s HQ at Gaydon, Warks, to put the new XKR-S through its paces. After a day spent with more than 500bhp under my right foot, not to mention a rear-wheel-drive chassis with adaptive dampers, I wasn’t expecting my long-term Peugeot RCZ – capable though it is – to feel quite as impressive on the return trip. I was wrong. Of course, there’s no way a 200bhp 1.6-litre turbo-engined RCZ has the punch of an XKR-S, but as soon as I left Gaydon and turned on to the twisty road outside, I knew that the RCZ could still put a smile on my face – even after being spoiled rotten by the big Jag. The Peugeot has been with us since December and I still love the way it drives. There’s definitely the spirit of the legendary 205 GTi and 306 GTi-6 in there – such is the way it responds to even the slightest turn of the chunky steering wheel.

It’s agile, too, with lots of front-end grip. And even though the engine requires some revs to do its best work, once in the power band, it flies; the short- throw six-speed box allowing you to keep the unit on the boil. It’s stylish, too. While the menacing black XKR-S attracted more attention on the day, even after six months on the road, the RCZ still has the ability to turn heads thanks to its striking pillars and double-bubble rear screen.

It’s a shame the front end looks like any other 308 – but that will be fixed with an upcoming facelift.  In the last few weeks, though, the coupé has started to pick up some problems that I hope don’t spell the end of the honeymoon period. For starters, the washer jets have stopped working – press the stalk and only the headlights are sprayed. The automatic adjustment of the adaptive headlamps has also failed – meaning a trip to the dealer is needed. What’s worse, though, is that the ride quality has really started to deteriorate.

Having driven it pretty much every day, I had an inkling there was an issue, but I put it down to being overfamiliar with the car. However, when road test editor Ross Pinnock took the RCZ one night, he couldn’t believe how crashy the ride had become. So what’s the problem? Well, the low-profile rubber probably doesn’t help, but the 235/40 R19 tyres aren’t exactly extreme. And all four were inflated correctly – I got them checked when I had a puncture. So it appears that, as with many Renault hot hatches we’ve run, the RCZ is starting to wear a bit.

I’ll have it checked when I visit the dealer to sort the other problems. While I’m there, I’ll ask why I’ve been unable to get my iPhone to talk to the car’s stereo. I know it won’t provide fully integrated control, but I should be able to play music.

All of that makes it sound as though running the RCZ has been a negative experience. Far from it. As well as being fast and enjoyable to drive, it has proven frugal. I’ve averaged around 30mpg, which is brilliant for a car that can cover 0-60mph in 7.6 seconds and hit 146mph.

The huge boot also proves that good looks needn’t come at the expense of practicality – my old Nissan 370Z was terrible in this respect. Having 309 litres of space (the Z provided a measly 235 litres) means I was able to transport an A0-sized picture back home from the framing shop one day, for example.

Niggles aside, I keep going back to that drive I had after I returned the XKR-S to Jaguar. If the RCZ can still make me feel good after a day with the best big cat for years, it really is a less-than-half-price hero.