We drive the incredibly practical Peugeot Rifter in Allure guise, with the impressive BlueHDi 130 engine under the bonnet... 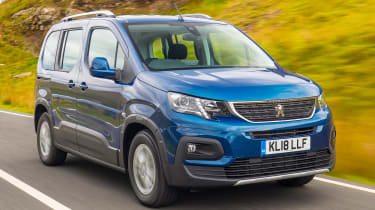 If a practical, sensible people mover matters above all else, then the Peugeot Rifter is extremely tough to beat. It’s got loads of character and is fairly pleasant to drive. The only trouble is, the same can be said of the Citroen Berlingo, and that’s ever so slightly cheaper.

It seems new cars often attempt to master so many areas that they end up not quite nailing any single one. There are notable exceptions, though: a Lotus Elise, for example, sacrifices refinement and storage space to become a beautifully communicative sports car.

At the other end of the scale, there’s the Peugeot Rifter: a people-mover whose sole focus is exceptional practicality. It’s one of three new van-based MPVs from the PSA Group, also including the Citroen Berlingo and the Vauxhall Combo life. Each shares the same chassis and engines, as well as much of their interior design.

Where the Berlingo takes on a typically quirky Citroen look, and the Vauxhall appears to adopt no particular look at all, the Rifter gets a selection of SUV-inspired touches. These tweaks include black plastic cladding around the wheel arches, bumpers and lower edges of the doors. But regardless, there’s no disguising the big, boxy profile.

Yet it’s that square shape that means little else on the road is so practical. Inside, there’s plenty of space for five tall adults. Or, if you’ve got kids, there’s space for three child seats across the back bench; all of which can be secured by their own individual ISOFIX mounts. There’s an XL model too, which adds an extra pair of seats in the boot.

The interior design is more functional than beautiful. It makes use of Peugeot’s ‘i-Cockpit’ layout, which places the dials above a small diameter steering wheel. Combined with an eight-inch touchscreen – standard on Allure and GT-Line trims – it makes the Rifter an easy car to figure out. Build quality is fine: in particular the plastic on the top of the dash looks and feels sturdy, though perhaps more in a ‘school canteen’, than an ‘Audi A8’ sort of a way.

With so much space on offer, it would've been easy for Peugeot to leave it at that. But in reality, it has been very clever; the seemingly endless cubby areas include a double glove box, vast door bins and shelves above the front occupants’ heads. While base models get a couple of cupholders between the front seats, the rest get a storage bin large enough to house a a full takeaway. With dessert. 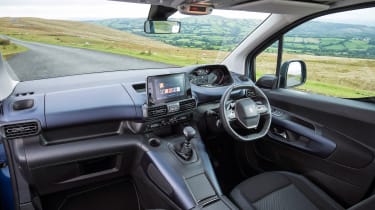 There’s also a roof storage system, which is brilliant: it combines a panoramic glass panel with a shelf running along the spine of the car and a big storage box at the end. The only downside is it’s only available on the top-spec GT-Line models. Given how clever it is, it’d be nice if it could be optioned on every model. The same goes for the opening tailgate glass: it’s much easier to use in tight spaces than the enormous bootlid.

It does, however, open up to reveal a vast load area: a 775-litre volume is greater than pretty much any estate or SUV on the market. Drop the seats and there’s a 4,000-litre space if you measure up to the roof; the Rifter really can double-up as a make-shift van.

So with such a razor-sharp focus on practicality, the Rifter is certain to drive terribly, isn’t it? Well no, not really. Sure, it’s not as agile as a regular family hatch – it tends to lumber through the turns somewhat – but it’s stable enough under load. The steering is nice and light, and ride comfort is fine, too. The high driving position gives both a great view of the dials and the road ahead, and there’s so much glass that visibility is pretty impressive as well.

This is helped by the platform it rides on: a mix of PSA van at the back and the Group’s latest EMP2 car platform at the front. All versions are equipped with cruise control, lane-keeping assist, speed limit recognition and autonomous emergency braking. 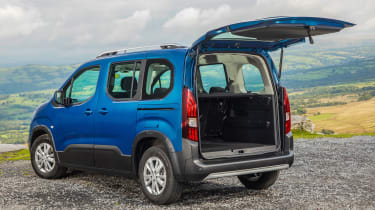 Performance is more than adequate for a car like this. The 128bhp diesel is smooth and pulls strongly, meaning it’s easily the pick of the range. There are less powerful versions of the same unit, but the lowest, with just 74bhp, will really struggle when loaded up with a family of five and their luggage. The 1.2-litre petrol models are even more refined, but the extra torque of the diesels make more sense when you’re lugging of people and possessions around.

The diesel comes with a choice of a six-speed manual or optional eight-speed auto gearbox. Less powerful versions get a five-speed manual. While the auto is the nicer of the two to use, the extra £1,400 – or roughly £30 extra per month on a four-year agreement – seems at odds with a budget-minded car such as this.

Which brings us on to prices. The Rifter starts from £19,650, which is roughly the same as the Vauxhall Combo Life, but £800 more than the Citroen Berlingo. Compare the 128bhp manual diesel variants of each versions and the price gap stays roughly the same, but the basic Rifter does without the touchscreen infotainment display.