Peugeot is pitching the Traveller as the upmarket alternative to rivals on the same platform, but how does it stack up as a classy MPV? 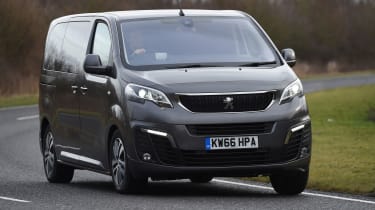 Peugeot’s pushed upmarket with the Traveller and it shows, with a comfortable interior packed with equipment. It’s spacious, too, and as a high-end executive bus it competes pretty well with the VW Caravelle. But it’s just a little too expensive to make it the best big MPV choice.

Seven-seat people carriers have plenty of appeal but if you have a large family or are a taxi driver, little beats the outright carrying capacity of a van. The Peugeot Traveller is the eight-seat MPV version of the Peugeot Expert van, and shares a lot of parts and design elements with the Citroen SpaceTourer and Toyota Proace Verso. However, the Traveller is aimed at buyers who want a little more luxury in their eight-seater.

Even entry-level Active trim gets plenty of goodies like dual-zone climate control, cruise control, automatic lights and wipers, and a slick 7-inch infotainment system offering Bluetooth and DAB connectivity. Our Allure model added to this with electric and heated front seats, a panoramic glass roof, a heads-up display, xenon headlights and keyless entry. Sat-nav is a £240 option, but Allure models do get leather trim to add to the luxury feel. The interior is well designed and trimmed in fairly high-end materials, but the Traveller can’t match the Volkswagen Caravelle for interior quality, so for those without lofty aspirations a mid-spec model should do just fine. 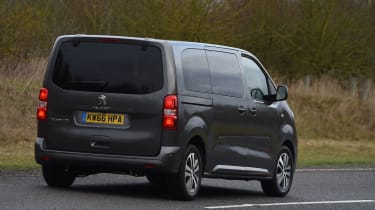 Our standard-wheelbase model had ample space for six-foot passengers in all three rows. It also offered a hefty 640-litre boot space even with all seats in position, but that space is tall and very shallow so it isn’t quite as useful as the numbers suggest. Removing the bulky seats is no easy operation, but if you manage to heave them out you’ll be rewarded with a capacity of 3,200 litres of space up to the window line. That’s truly (and unsurprisingly) van-like.

On the move is where the case for a more car-like people carrier starts to make sense. Though there’s plenty of adjustment in the seat and steering wheel, the driving position is resolutely upright and won’t suit drivers with very long legs. The cavernous interior amplifies road and wind noise, making for a fairly noisy ride at speed, although the soft suspension means it’s comfortable even without a load in the rear. 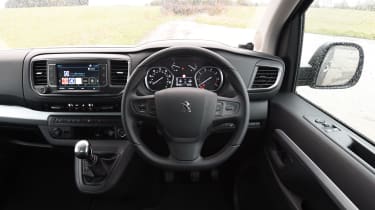 Performance from the 148bhp 2.0-litre diesel isn’t sparkling, but it’s got strong in-gear pace. It’s just a shame the six-speed gearbox has such a loose, baggy action - as we've seen in many of Peugeot's smaller cars. The Traveller is largely easy to drive, though, with great all-round visibility courtesy of that high-set driving position. It feels smaller on the road than its size too, with a surprisingly tight turning circle. It even handles tidily enough, although the steering is very vague and requires a laborious four turns from lock-to-lock.

Unlike the Toyota Proace Verso and the Citroen SpaceTourer, Peugeot won’t be offering the Traveller in a more basic trim level, so list prices seem a little high next to those vans. There isn’t a nine-seater version on offer, either. Look at it next to the Volkswagen Caravelle and things start to stack up a little better though. To nab a comparably equipped VW you’d be spending well in excess of £40,000 – making the Peugeot’s £36,985 seem decent value. 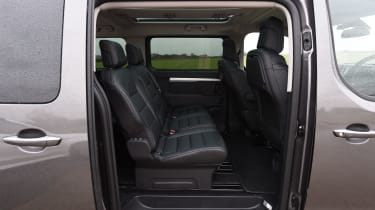 But if you don’t need the extra seat, you can look in the other direction. A top-spec Citroen Grand C4 Picasso still offers space for seven adults (albeit not for long journeys), a comfortable ride and efficient engines – plus far superior refinement and driving dynamics – for under £30,000.