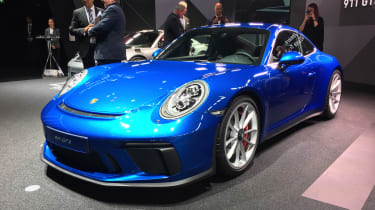 Porsche has revealed a new 911 GT3 variant at the Frankfurt Motor Show that it's touting as 'the purist's 911', the GT3 Touring.

The newcomer sits alongside the regular GT3 and GT2 RS at the top of the 911 range as the track-focused variants of Porsche's ubiquitous sports car. However, the GT3 Touring is a toned down, more basic version of the latest 991.2-generation 911 GT3.

The most obvious difference between the Touring and the GT3is the removal of the huge rear rear wing, which is replaced by a regualr engine cover with black mesh grille, although a pop-up spoiler is still part of the package. There's also GT3 Touring badging so people still know this is a serious piece of kit and not just a 'regular' Carrera with centre-lock wheels fitted. 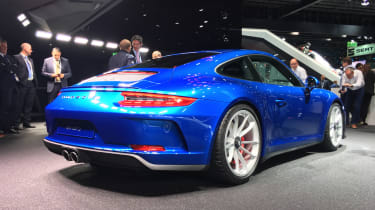 The rest of the GT3 Touring package s taken from the GT3, so there are aggressive looking bumpers front and rear, wider wheelarches and 20-inch forged alloy wheels. In many ways, it’s a natual successor to the ultra-exclusive 911R, which was a variant of the last 911 GT3.

Under that more subtle engine cover is the same 493bhp 4.0-litre flat-six as the regular GT3. However, like the 911R, the Touring will only be available with a six-speed manual gearbox, with no dual-clutch automatic PDK option.

Porsche claims the car is fast enough to manage 0-62mph in 3.9 seconds, if you can shift quick enough. Top speed comes in at 196mph.

Under the skin, the GT3 Touring receives a rear-wheel-steering system, a torque vectoring limited-slip differential, plus the same dampers and chassis tweaks as the GT3. For more changes, you’ll have to look in the cabin. 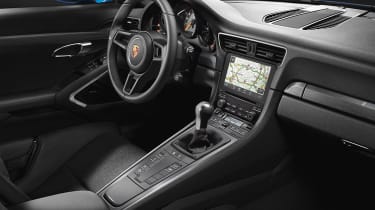 The GT3 Touring boasts a pared down interior, but without the bells and whistles of the GT3 and GT2 RS models. As such, leather sports seats with fabric centres are matched with a simple leather steering wheel and a basic dashboard. It’s still a two-seat model though.

The options list is fairly extensive, meaning bucket seats, carbon ceramic brakes and the Sport Chrono pack will all be available on the Touring, but Alcantara interior trim and a roll cage remain off limits. It’ll be priced from £111,802 when it hits showrooms, which is the same as the regular GT3.

What do you think of the new Porsche 911 GT3 Touring? Have your say in the comments...