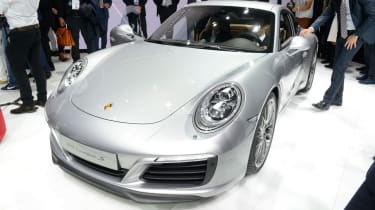 All the questions surrounding Porsche’s facelifted 911 have finally been answered as the covers are off. As suspected, the German sports car brand has made the switch to turbocharged engines, with the revised 911 range revealed at the 2015 Frankfurt Motor Show today. Prices start from just over £76,000.

Porsche’s main focus has been beneath the skin of the 911, but subtle design tweaks have also been made. At the front, new headlamps featuring four-point LED daytime running lights and reshaped air intakes are the big changes, while redesigned rear lamps and a new rear engine cover can be seen at the back.

Inside, you will notice the updated Porsche Communication Management (PCM) touchscreen infotainment system, now with Wi-Fi and Apple Carplay. Cars with the optional Sport Chrono package get a new four-mode switch rotary knob on the steering wheel, inspired by 918 hypercar. That allows drivers to configure their own vehicle setup, with adjustments on Porsche’s Active Suspension Management (PASM), the PDK transmission and sports exhaust possible. 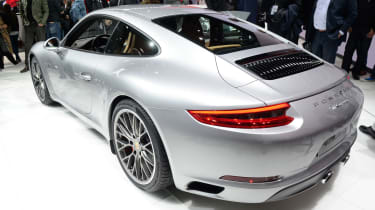 A new ‘Sport Response’ button has also been added which prepares the drivetrain for 20 seconds of maximum acceleration, by selecting the optimum gear and adjusting the engine management for better response. Other new tech includes adaptive cruise control with a coasting function, that can also brake when going downhill to keep you at your pre-set speed. A post-collision braking system is standard, while lane-change assist is optional.

New turbocharged engines for the Porsche 911

The biggest news concerning the new Porsche 911, however, is the new turbocharged engine range. The entry-level 911 Carrera ditches the 3.4-litre flat-six for a newly developed 3.0-litre twin-turbo flat-six, which brings a 20bhp power boost to 365bhp.

The Carrera S receives the same engine but with modifications to boost power to 414bhp. Both cars take 4.2 and 3.9 seconds respectively to get from 0-62mph – two-tenths faster than before. Porsche is adamant the traditional flat-six character hasn’t been lost, and is keen to emphasize the 7,500rpm rev limit of the new engine. 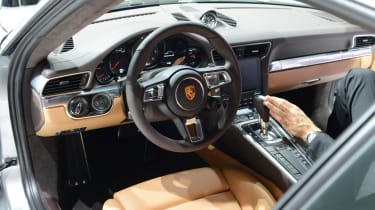 The arrival of turbocharging is primarily to boost efficiency, with PDK-equipped Carreras capable of up 38.2mpg with CO2 emissions of 169g/km. Prices start from £76,412 and rise to £94,698 for the Carrera S Cabriolet – an increase of around £2,500 over the outgoing model.

What's your view of mainstream Porsche 911 models going turbo? Let us have it in the comments section below...