The normally-aspirated, GT3 RS-engined 911 R is the road car that Porsche purists have been waiting for... 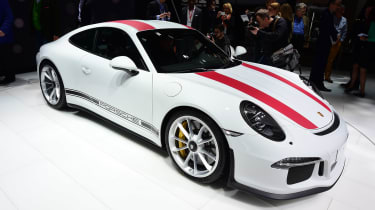 A switch to turbocharging across the Porsche 911 range has caused consternation amongst many Porsche fans, but the exciting new Porsche 911 R should silence critics at a stroke.

With a naturally-aspirated 4.0-litre flat-six engine lifted straight out of the more track-focused GT3 RS model, the new limited-edition 911 R - just revealed at the Geneva Motor Show - will crack 0-62mph in 3.7 seconds and top 200mph. Porsche describes it as a 'wolf in sheep's clothing,' as it retains all of the GT3 RS's performance and chassis dynamics, but without that car's stripped-down and roll-caged track-oriented appearance. 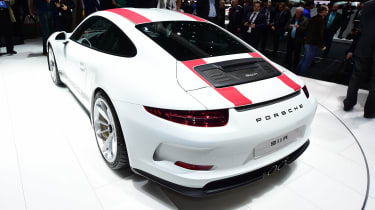 The Porsche 911 R uses lightweight body panels and chassis from the GT3 RS, but does without the rear wing and instead has the normal retractable spoiler on the back. It's also lighter than the GT3 RS by 50kg, thanks to carbon-fibre construction and plastic windows.

You do still get racy-looking stripes over the roof, plus carbon-fibre bucket seats, fabric door handles and a GT sport steering wheel inside. 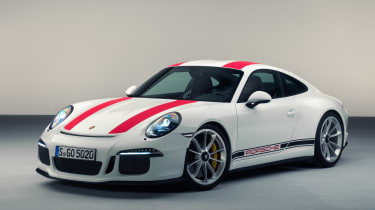 The 911 R also gets a mechanical limited-slip differential and specific real-wheel steering to improve handling, as well as carbon-ceramic brakes as standard. The manual gearbox will please enthusiasts, too.

Lightweight aluminium wheels with extra-grippy tyres keep the car planted to the road, and you can even order the car with a single-mass flywheel to improve the engine's responsiveness at high revs. 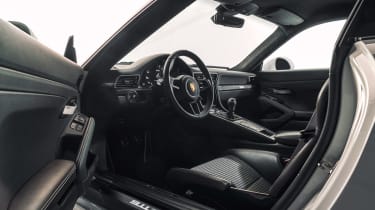 To add to the usability of the car, you can order a 911 R with a system that raises ground clearance at the front by 30mm, to help you get over speed bumps and into car parks. Air-conditioning is optional too, as well as a stereo system.

The 911 R is priced from £136,901 and as production is limited to 991 cars globally, it promises to be hugely sought-after by Porsche enthusiasts.

Welcome to our Geneva Motor Show hub page, scroll down for all our Geneva content...
Porsche 911 Turbo S vs McLaren GT

The standard 911 Turbo sits below the existing S model, yet still promises staggering speed for its £134,400 price tag