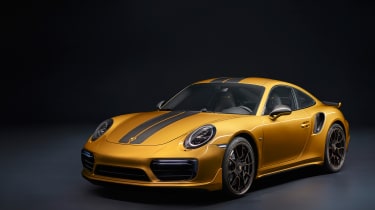 Porsche has lifted the sheets off a new limited edition 911 Turbo S, which is the most powerful 911 Turbo ever.

For the extra cash, buyers will get a 911 Turbo S with exclusive design tweaks, but importantly, additional kick by way of a tuned twin-turbo 3.8-litre flat six, now developing 599bhp. 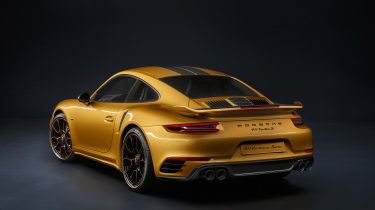 Despite the extra 27bhp, and 750Nm of torque, the 911 Turbo S Exclusive Series isn’t faster on paper to 62mph than the regular car, nor is it faster right at the top end. Porsche claims it’ll dash to 62mph in 2.9 seconds from standstill with a top speed of 205 mph. However, over longer bursts of acceleration the extra power makes a difference – 0-124mph takes 9.6 seconds, trimming three tenths of a second off the normal 911 Turbo S.

As standard, the car is fitted with Porsche Active Suspension Management. Dynamic Chassis Control and the Sport Chrono package, so drivers can tweak chassis and suspension settings on the fly.

It stands out against the regular 911 Turbo S with a range of bespoke styling tweaks, with many of the finishes applied by hand at the Porsche Exclusive Manufaktur in-house workshop.

A unique metallic gold paint finish is available alongside a selection of other colours, plus racing stripes finished with a carbon weave effect loop over the bonnet and roof. The bonnet, roof and side-skirts themselves are actually made from carbon-fibre, while around the back, aero tweaks in the form of a new rear wing plus a new rear apron differentiate the Exclusive Series. The car rides on new 20-inch centre-locking wheels painted black with gold detailing. 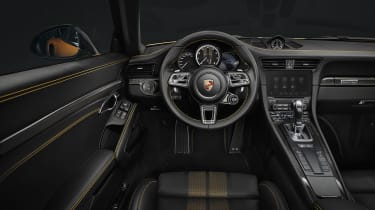 In the cabin, Porsche’s Sport Seats Plus are fitted as standard, but trimmed with two layers of perforated leather – the inside layer featuring gold stripes to create a colour scheme in tune with the car’s exterior detailing. Contrasting golden yellow stitching appears too, alongside a golden double-stripe effect in the Alcantara roof lining and copper thread woven into the carbon interior trim elements. Lastly, a plate featuring the limited-edition number features on the passenger side of the cabin, while door sills finished in carbon fibre get Exclusive Series lettering.

Do you like the Porsche 911 Turbo S Exclusive Series? Let us know in the comments...