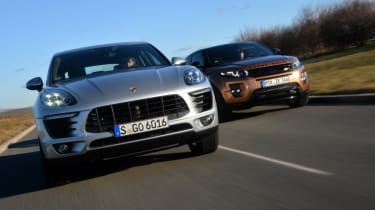 The Porsche Macan is now the driver’s choice in this class, yet it doesn’t come at the expense of comfort, luxury or refinement. If style is your priority, the Range Rover Evoque still leads the way, but the Porsche has a truly broad range of talents. It’s easy to see why the brand expects this car to be a future best seller. As with the Cayenne and the Panamera, Porsche has taken a car that shouldn’t work as a sports car and turned it into something genuinely fun and hugely capable.

The Porsche Macan knows what it has to beat. The Range Rover Evoque has the right badge, striking concept car looks and is genuinely sporty to drive, so it’s no surprise that Land Rover has been building them flat-out since the launch in 2011. But the Evoque’s position was always going to come under threat – and the moment of truth has arrived.

Yes, the Macan is based on an Audi Q5, but Porsche’s engineers have sprinkled their magic on the chassis and say it’s the first compact SUV that’s also a sports car. It’s a bold claim, and one the Diesel S we’re testing (expected to be the big seller in the UK) should be least equipped to showcase. So how does it compare to the class-leading Evoque?

The Macan’s driving position has all the hallmarks of a sports car. There’s a slight step up into the cabin, before you take your seat cocooned within the interior. You get a great view of the road ahead, but it’s clear Porsche has worked hard on recreating the low-slung feel of a 911.

There’s plenty of adjustment in the seats and the 918-inspired steering wheel, so you can get your driving position spot-on before taking off. We’d still say the Evoque’s interior looks more appealing, but the Macan’s chunky switchgear has a more solid feel.

The Porsche has the measure of the Evoque in terms of firepower, although it’s important to note that the 187bhp 2.2-litre engine in our Evoque SD4 Dynamic Coupe (currently the most powerful diesel in the range) is two cylinders down on the Macan’s 254bhp 3.0-litre V6 diesel. Then again, the Range Rover does cost £1,795 less.

Fire up the Porsche and you’ll find it quickly settles down to an audible, but refined idle. Squeeze the throttle and it doesn’t have the immediacy of either of the petrol engines in the range, yet it manages to sound sporty, has a creamy and linear power delivery and there’s masses of punch in the middle of the rev range. By comparison, the Evoque’s four-cylinder sounds slightly strained and can’t deliver anywhere near the same thrust. In other words, the Range Rover moves along well enough, but the Macan is on a different level.

The PDK box shuffles its seven gears seamlessly, while pressing the Sport Plus button means each full-throttle upshift slams home with an aggressive thump. The Evoque’s new nine-speed auto is a bit smoother at low speeds, although it doesn’t have the same urgency when you want to push on. 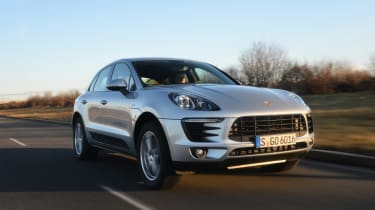 SUVs should be all at sea on a track, but thanks to its four-wheel drive, the Macan has plenty of traction for launching out of bends. There’s a rear bias to the system, too, so the tail will slide if you’re too heavy on the accelerator. For the ultimate in handling, though, you’ll want to specify the PTV torque vectoring system and PASM active suspension – these come as standard on the flagship Turbo.

Despite having more body roll, the Evoque’s steering is marginally sharper when you first turn into a corner, but from then on the feel evaporates and it’s harder to place it precisely on the road. Although you’ll need a bit more lock, the Porsche stays far flatter and offers more feedback through the wheel.

It’s a similar story when it comes to ride quality. There’s no getting away from the fact that the Macan feels firm, but the damping is so good it tackles bumpy roads with less fuss than the Evoque. And that’s a recurring theme, on the road at least – the Porsche feels like a more sophisticated piece of engineering, while the Brit tries harder to be sporty but with less success.

Still, the Evoque retains the edge off-road. We tackled 80 per cent inclines, muddy bogs and steep, slippery descents easily in the Porsche, so it’s more than capable, but a way off Range Rover territory.

If mud-plugging is high on your agenda, Porsche offers air-suspension which lets you raise the suspension by 40mm, improving the approach angle from 17 to 19 degrees in the process.

As well as track car and off-roader, the Macan works as a long-distance family car. Its 500-litre boot – accessed by an electronic tailgate as standard – provides plenty of room for large suitcases, while the rear seats are good enough for tall adults, despite the sweeping roofline. The Evoque has 50 litres more room to play with, and a flatter loading lip, but our Coupé sacrifices rear access for extra style.

While the Range Rover looks better inside and out, to our eyes at least, the Macan feels like a higher-quality piece of kit. Porsche has managed to transfer its sports car DNA to the compact SUV class without compromising its everyday ability. This basic Diesel S model will be a popular choice in the UK just because it makes so much sense as a daily driver – but it can handle itself on the track and with light off-roading, too. 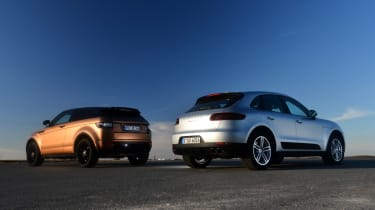 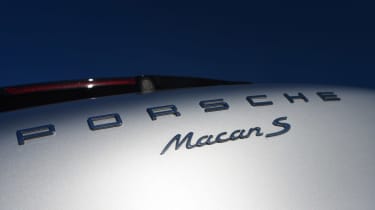 Porsche’s S models are often the best all-rounders, with just enough performance at just the right price. Thanks to a 355bhp 3.0-litre twin-turbo V6, the Macan S is only six-tenths slower than the Turbo from 0-62mph, which is a good start.

It does without the PASM active suspension as standard, but add it as an option and the car stays flat and level in sharp bends. We were surprised just how comfortable the Macan is – Porsches are generally on the firm side, but the Macan soaks up bumpy roads well. Air-suspension – an option on all cars – adds a final layer of smoothness. It’s incredibly refined, too, with wind noise only really noticeable above 70mph.

The best thing about the Macan S, though, has to be its price. Yes, it’s expensive compared to many cars this size, but nothing else offers such fine pace and handling for £43,300. We’d buy this S instead of the Turbo and spend the £16k we’d saved on extras.

If you can stomach the running costs, the S is the petrol Macan to go for. It doesn’t have the sensible appeal of the Diesel S, but it offers pretty much all the pace of the Turbo for a much lower price. We’d say save the cash and invest in the air-suspension for a really capable and luxurious compact SUV.

The Porsche Macan Turbo is by far the maddest compact SUV on the road, with its 3.6-litre twin-turbo V6 putting out 394bhp to match a 911 from 0-62mph.

We drove the Turbo on a track and on the road, and it felt at home on both. Out on track, with or without the optional air-suspension, there’s next to no body roll as you turn into a fast corner with the steering telling you just what the chassis is doing. In the wet, it’ll slide into a bend on the brakes and kick the back out if you’re too hard on the throttle on the way out.

On the road, there’s great traction and smooth acceleration up to the red line. But it doesn’t feel frantically fast, and lighter steering and more supple suspension make the Macan more relaxed than Porsche’s sports cars.

The ride is firm, on air or steel springs, yet you won’t dread long journeys as the cabin is well built and luxurious. It’s also clearly laid out and really quiet, even at motorway speeds.

If you have to have the ultimate, the Turbo is the car for you. But do you really need it? A Macan S with the Sport Chrono pack and PASM active suspension will feel almost identical from behind the wheel. You sacrifice a bit of pace but you save a lot, and still get the best-handling compact SUV around.