Is 750 miles possible from a single tank in a Porsche? We find out 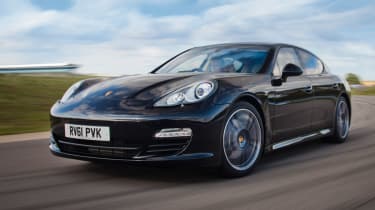 There are those who won’t like the Panamera Diesel, claiming it’s not a proper Porsche – and they have a point. But around 50 per cent of UK sales will be oil-burners, so it’s a car that makes solid business sense. Unusually, the fact it’s superb to drive quickly plays second fiddle to its impressive fuel economy and vast single-tank range, giving it a clear advantage over its thirstier but faster petrol brothers.

Advertisement - Article continues below
The Panamera is stretching its legs with a new diesel. And although Porsche purists won’t approve, you can’t help but be impressed by the claim that it can cover 745 miles on a single 80-litre tank of fuel.
It’s a brag we had to put to the test, so we set out to drive the 600 miles from Inverness to Auto Express’s London base – without stopping once for fuel.
Video: watch CarBuyer's video review of the Porsche Panamera
[[{"type":"media","view_mode":"content_narrow","fid":"68702","attributes":{"alt":"","class":"media-image"}}]]
From the outside, barring a Diesel badge, the model looks just like any other Panamera. Even the exhaust has been tuned to produce a rumble closer to that of a petrol V8 than an oil-burner. Under the bonnet is the same Audi-sourced 3.0-litre V6 diesel as used in the Cayenne, attached to an eight-speed auto box.
Advertisement
Advertisement - Article continues below

While 247bhp might sound meagre compared to the 542bhp of the Turbo S, it is the Diesel’s 550Nm of torque that counts.
Advertisement - Article continues below
It means there’s plenty of mid-range thrust for a car weighing nearly two tonnes, as well as effortless cruising ability – perfect for our 600-mile slog.
A top speed of 150mph and 0-62mph in 6.8 seconds are still respectable in this company, although the Mercedes CLS 350 CDI would have the measure of the Porsche in a drag race. But it’s the fuel economy of 43.5mpg that we’re trying to match here.
Our aim wasn’t to make this a hypermiling competition, crawling along the motorway at 56mph, but to drive the car as it was intended – briskly along winding highland roads and maintaining pace with other M-way traffic. And in both situations, the Porsche excelled.
On fast, twisting routes, the car disguises its bulk brilliantly, and offers feedback through the wheel that large Mercedes and Audis simply can’t replicate. On the motorway the refinement and ride are impressive, while stability in cross winds, during fast lane changes and under firm braking is a constant reassurance. All the time the diesel remains smooth and quiet, and a burst of overtaking pace is only a gentle throttle squeeze away.
After 10 hours behind the wheel and just under 600 miles, we arrived in London feeling ready for more. Incredibly, we still had a quarter of a tank left, and the trip computer said there were still 140 miles remaining.
Add that to the 600 miles we drove, and the 740-mile range virtually matches Porsche’s claim. We even bettered the official fuel economy figure by 0.3mpg.
Advertisement
Share this on TwitterShare this on FacebookEmail
Advertisement