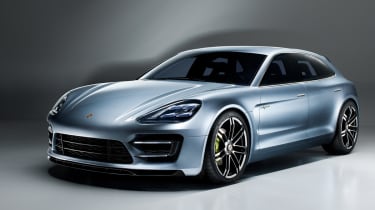 Porsche is on a roll with the new 911, Boxster and Cayman in showrooms, and the Cayenne and Panamera selling well. The Macan small SUV is on the way, and this Panamera estate will diversify the range further. Before then, this plug-in powertrain will prove Porsche can maintain its performance standards, and embrace a greener future.

The Panamera Sport Turismo is Porsche’s first ever estate car, and although it’s officially a concept, take our word for it – this car will be on sale by 2015.

It’s likely to be sold alongside the second-generation Panamera as a second derivative, and will offer style, performance and practicality in equal measure.

First shown at the Paris Motor Show in September, we got our chance to drive around Beverly Hills, in LA, and the stunning ‘shooting brake’ design looked right at home among the rich and famous.

Despite its elegant lines, the Turismo works well as an estate, with roughly 100 litres more luggage space than the saloon, at around 550 litres.

But the Turismo is not only a design triumph for Porsche, it’s a technical tour-de-force, with a new e-hybrid petrol-electric engine that will slot into the current Panamera next year.

It combines a 328bhp supercharged 3.0-litre V6 with a 94bhp electric motor mounted on the auto gearbox for a total of 410bhp. That’s enough to propel it from 0-62mph in under six seconds, while returning 80.7mpg and emitting 82g/km of CO2.

The technology is still being fine tuned, but when you flatten the accelerator the Turismo is seriously quick and deadly silent.

And although the car we drove is currently a one-off hand-built concept, it felt like a real Porsche with precision handling and responsive steering.