We weigh up which roof bars are the best for carrying a load. We test eight to see which comes out on top 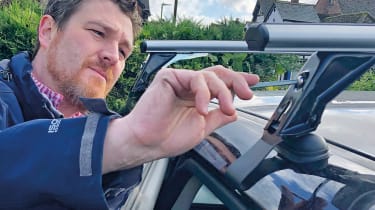 Whether you need to carry a roof box for your annual holiday, bikes for a weekend ride, or long loads for work, roof bars are an essential accessory that can turn your humble hatchback into a proper load-lugger.

You’ll need to choose your bars carefully, though, because the worst can be a nightmare to fit and remove. They can hit fuel consumption, too, and cause irritating wind noise that’ll drive you potty during a long journey.

While many estates and SUVs have integrated roof rails to make fitting bars easier, most cars come with plain roofs, which can make fitting racks tricky. We tried eight pairs of bars to see which was up to the challenge.

We chose one of the best-selling cars in the UK – a 2017 Nissan Qashqai – without roof rails for the test, and fitted the bars using the supplied instructions.

Points were awarded if they were easy to assemble and later remove and refit. Once the bars were installed on the Qashqai, we checked if any wind noise was generated at motorway speeds.

We also awarded additional points for lightweight and for any built-in security features. Finally, we checked prices online to judge their value for money.

If money were no object and we did a lot of miles with our bars in place, we’d buy Thule’s WingBars. They’re the most solid, quietest and, once assembled, are easy to remove and refit. But they are too costly for occasional use. If we only fitted bars a few times a year for holidays or trips to Ikea, we’d save the cash and buy one of the Cruz sets instead. They’re great value for money, fitted well and felt secure. 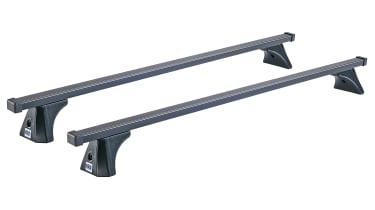 We weren’t expecting much, but these bars surprised us by being easy to fit, secure, and just as quiet as Cruz’s Airo when on the move. The car-specific fitting kit went neatly around the contours of the Qashqai’s roof, and the bars were then held securely with bolts. Locks aren’t included, yet they only cost £10 extra. The square bars aren’t pretty and won’t accept ‘T-track’ accessory fittings, but if you just need basic bars for a roof box, these work perfectly and are good value. 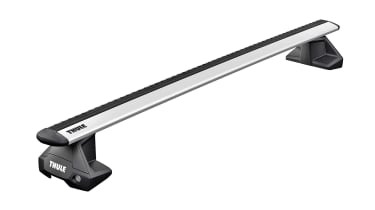 Thule has previously won our Best Buy for bars that fit to cars with built-in rails, and it’s easy to see why. Once you’ve got through the fiddly assembly process they take minutes to remove or refit. When you are driving they are almost completely silent, too, thanks to some clever rubber strips that cover the T-shaped slots, while still allowing accessories to be fitted. There’s no doubt that they are expensive, but if you do a lot of miles with the bars in place, these are worth the extra outlay. 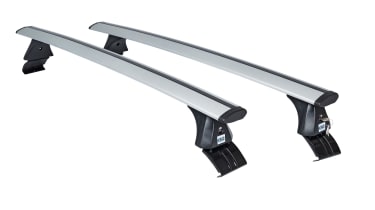 These Airo bars use exactly the same fittings as our Best Buy square bars, but have the aero-look and T-track of the Thule WingBars. It’s a good combination, especially at this price. The T-channel allows the easy fitment of accessories such as bike racks but, unlike the Thule bars, you’ll need to cut the rubber trim around them, which may increase noise. In fact, the Airos weren’t noticeably quieter than the square bars. Unless you need the T-tracks, we’d save the money and choose the Optiplus. 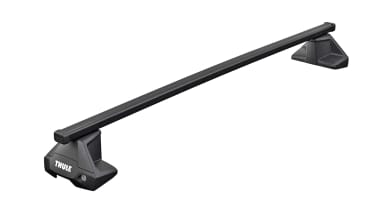 The basic square bars from Thule will save you £37 over the sleeker Wings, and use exactly the same mounting system. They might not look as good or have the nifty T-track mounting system, but these hefty bars still have a quality which could make you think they’d outlast the rest of the car. Inevitably there is a slight whistle at speed, but it was easily drowned out by a radio. They’re pricey, but worth the investment if you’d use them regularly. 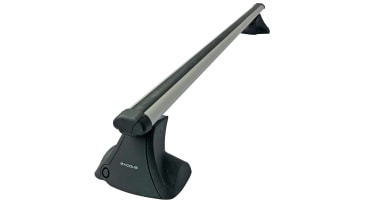 These are sold under Halfords’ own brand Exodus, but look suspiciously like an old Thule design. In fact, the foot pack and mounting kit are identical to Thule’s, which means the bars are easy to mount and take off once you’ve worked out the initial installation. The bars are rounded, so they created a little more whistling than the newer Thule design, but this was rarely intrusive. Our main issue was the price: add a £24 lock kit and you’re within a few quid of the Thule. 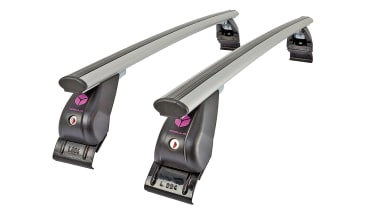 We had high hopes for the Modula bars because they look good, have locks as standard and T-channels for accessories. But we came away disappointed. They were complicated to fit and, despite having a custom-made kit for our Qashqai, the brackets didn’t fit very well. Bare metal bolts are left exposed on the inside of the fitting, which makes us worry about how they’d fare after a trip on salty roads. These, and the poor fitting, also made the bars the second noisiest on the test. 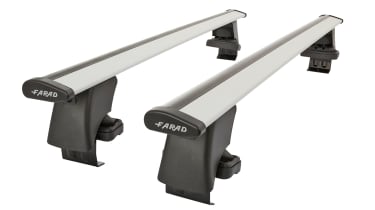 At first we thought these bars might win when we saw the specification. Just over £100, 100kg capacity, aero design with a T-track, and largely pre-built to save time. But they proved really frustrating. We got the rear bar to seat properly, but when tightened to 4Nm as suggested in the instructions, they just didn’t feel secure. The front bars couldn’t be made to fit on the roof snugly at all. As a result, the bars whistled like a cheerful postman at any speed of more than 40mph. 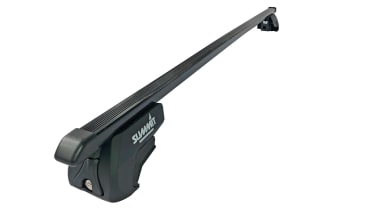 We were keen to have a pair of bargain-priced Summit bars in the test, because the firm won previously with the SUP-957 for cars with built in rails. But Mountney couldn’t supply bars to fit our Qashqai in time, so sent its square bars to try on another car. We compared them with our benchmark Thule Evos and found they were inevitably noisier, but not by enough to bother anyone once the radio was on. We weren’t able to test on the Nissan, so we haven’t given them a score.