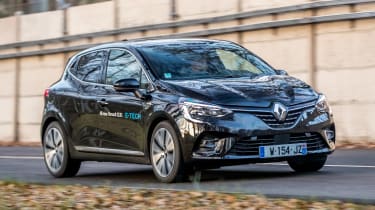 On this evidence at least, the new Clio promises to be by far the best small hybrid car on offer. Its supremely clever, but slightly busy-feeling powertrain makes the supermini refined and punchy. If the official fuel economy and emissions figures can live up to Renault’s high expectations, and the car is sold at an attractive price, then the firm could have a real winner on its hands.

The Renault Clio E-Tech Hybrid is a vehicular Rubik’s Cube. It seems straightforward at first; it’s a small five-door hatchback that’s now offered with a full hybrid powertrain, consisting of an auto gearbox, 1.6-litre petrol engine and an electric motor to help keep emissions down and performance up. Or, to be a little more precise, CO2 of less than 90g/km (precise efficiency figures have yet to be confirmed) and power of 138bhp.

And that’s all you really need to know. You don’t need to know that it has a ‘clutchless’ dog gearbox derived from Formula One tech. Nor that it has two electric motors – one driving the car, a second that functions as a brake-regeneration module, starter motor and occasional power booster.

You might not even want to know that it has two gears for the primary electric motor and four for the engine, plus no fewer than 15 operating combinations – including an EV mode that can power the car at up to 40mph. Renault claims it’ll even propel the Clio up to 80 per cent of the time in town traffic. 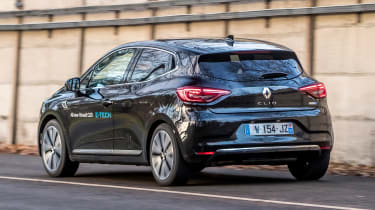 You don’t need to know all this, because trying to fathom the engineering wizardry is as baffling as that aforementioned plastic toy. But it is useful to be aware of how multi-faceted the powertrain is, because it’s a busy-feeling system in practice.

With the set-up in the default ‘My Sense’ hybrid mode, we could feel the petrol engine and electric motor shuffling responsibilities in our pre-production car, occasionally thumping down a gear as you lift off the throttle and the brake regeneration kicks in.

Speaking of which, there are two levels of energy recovery. In standard mode it’s very mild, while nudging the gearlever into ‘B’ mode makes it so strong that you can almost drive it using the throttle pedal alone in town. Although this is a slightly restless powertrain, it is always impressively quiet.

Even at full throttle the revs don’t spike wildly as you find in most full hybrids, and it delivers a decent mid-range burst of power, too. Stick it in electric mode and, of course, it feels seamless, calm and usefully nippy at town speeds.

While we didn’t drive it for long enough to vouch for Renault’s claims regarding the urban pure-electric potential, nor to get an idea of real-world economy, it bodes well that the Clio E-Tech spends a useful amount of time in electric mode – more than the outgoing Toyota Yaris Hybrid. Otherwise, the Clio steers and handles sweetly, albeit with a slightly firm ride.

The interior is spacious, well finished and a very comfortable place to spend time in, which is why we already rate the standard Clio very highly. Will the hybrid version be worth what’s likely to be some £18,500 to £22,000, depending on which of the three trims you go for? We’ll have to wait for final pricing and efficiency figures, not to mention a chance to test real-world economy, before we can deliver a final judgement.