If you thought the Megane was impressive, the hot Renaultsport Clio R27 manages to force its way into the top 5 with sheer poise 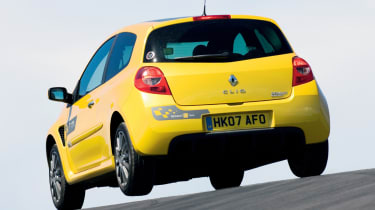 Built to celebrate Renault’s back-to-back Formula One world championships, the special edition is as startling to drive as its bright yellow paintwork suggests. And beneath lies the secret to the F1’s success – the new Cup suspension. It’s lowered by 7mm, with springs stiffened by 27 per cent at the front and 30 per cent at the rear.

Inside, the changes are limited to a numbered plaque on the transmission tunnel and high-backed Recaro seats. These provide a flawless driving position and lift an otherwise drab cabin.

The 197bhp 2.0-litre engine has been left untouched. Below 5,000rpm, it is a little gutless and uninspiring, lacking the turbo torque of the Vauxhall Corsa VXR or MINI Cooper S. But push on and the unit begins to pull hard, egging you on with razor-sharp throttle response and a zesty roar from the twin exhausts.

The revised settings make the Clio the most focused front-wheel-drive car here. Body roll is virtually undetectable and understeer non-existent. Grip is strong, but lift off the throttle mid-corner and the nose tightens its line and brings the rear into play. To top it all off, the previously light and lifeless steering has now gained weight and feel, while the car’s trademark agility and composure remain intact.

The uncompromisingly hard ride can get uncomfortable on the road, while a short top gear makes motorways a chore. But the R27 remains a blast to drive and never feels out of its depth – even among the exotica gathered here.