The Renault Clio is a stylish and relatively cheap to run supermini, but it's not a class leader 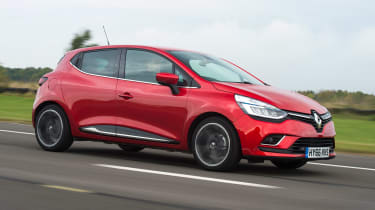 The Renault Clio looks great and is reasonably cheap to run, but it can't quite match up to the best in the supermini sector, including the Ford Fiesta, Volkswagen Polo and Skoda Fabia. In fact, the previous generations of those cars are more than a match for the Renault. The French manufacturer has already unveiled its replacement, which should arrive on sale in the UK in the Autumn of 2019.

The Clio's trump card is its sense of style. Its bold nose and curves won't be to all tastes, but there's no denying it's distinctive. The cabin looks modern and classy, too, with a tablet-style control screen on all but the most basic models dominates the nearly-button-free dash.

It's just a shame that some of the cabin materials don't match up to its main rivals, and it's not the most spacious model around, either. Minor updates in 2016 went some way to address this, but it still falls short of the class best for overall fit and finish.

The Clio does offer plenty of kit and there's a comprehensive range of efficient engines and trim levels to choose from, but the drive still trails the Fiesta’s.

Renault has been selling the Clio in the UK since 1991, and with total sales exceeding 1.2 million, there is little reason for the French marque to stop now. The Clio had quite the shadow to step out from – the Renault 5 that went before it was immensely popular and had been on sale for over 20 years, almost reaching 5.5 million sales globally when the Clio arrived.

The Clio however, has eclipsed this figure, with a global sales flying past 13 million cars worldwide. Arguably, the Clio’s success story began at its public unveiling at the 1990 Paris Motor Show, where the small hatchback caught the public's eye. Interestingly, the name ‘Clio’ comes from the Greek word meaning ‘made or make famous’, which came true the next year, when the Clio picked up the European Car of the Year award.

The second-generation Renault Clio landed in 1998, at a time where the previous model had secured its place as a top 10 seller in the UK and another all-new model followed in 2005. Things would remain the same until 2012, when the fourth-generation Clio was launched (again at the Paris Motor Show) but with no three-door version. 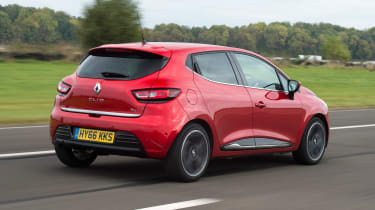 That being said, the rear door handles are hidden in the window frames, making the Clio appear to be a three-door. Due to the perception that UK buyers would prefer the Clio-based Captur crossover, the estate version of the clio was not offered to UK buyers.

The Clio range was simplified in 2018, with the former five trim levels condensed into just three: Play, Iconic and GT Line. Entry-level Play models get a decent level of standard kit, including keyless entry and cruise control with a speed limiter; Iconic adds extra equipment including a 7.0-inch infotainment system with sat-nav, while GT Line gets big-car luxuries like climate control and LED headlights.

There’s a choice of petrol and diesel power, with two three-cylinder petrol engines and a four-cylinder diesel on offer. These each offer decent economy and emissions, but performance is lacking compared to rivals. Similar engines in the Volkswagen Polo, Ford Fiesta and Skoda Fabia all feel smoother in everyday motoring.

The petrol engines are only available with five-speed manual gearboxes, while the diesel is offered with the option of a six-speed automatic.

Rivals for the standard Clio include perennial residents of the monthly new car sales charts, the Ford Fiesta, Volkswagen Polo and Vauxhall Corsa, while French rivals the Peugeot 208, Citroen C3 and even the DS 3 are all worth considering. The SEAT Ibiza and Skoda Fabia offer sporty style and reasonable value respectively, and the Mazda 2 is a more entertaining drive.

The Hyundai i20, Kia Rio, Toyota Yaris and Nissan Micra are all sensible alternatives, while the Suzuki Baleno offers more space in a good-value package, and the Dacia Sandero is a budget alternative that uses similar running gear to the Clio.