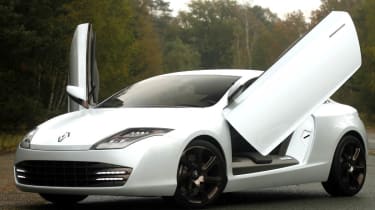 If you were disappointed by the styling of the brand new Laguna, then the Coupé version will blow you away. Renault has pulled out all the stops with the latest addition to its line-up. It’s fantastic to look at, with a sleek and dramatic shape that demonstrates French flair at its very best. We have no doubt that the newcomer will turn heads when it arrives here in December next year – and with a winning range of engines plus a hi-tech chassis, it should drive as well as it looks. We can’t wait!

it’s the super-coupé that’s got added Va Va Voom! And it proves that Ren­ault is swapping safe for sexy.

Reaching UK dealers at the end of next year, the sensational new Lag­una Coupé shows the French brand is returning to flamboyant design – building on the legacy of the Avan­time MPV and the luxury Vel Satis.

However, unlike those models, it will be no sales flop. The newcomer is set to mark the revival of the affordable coupé, and will join the reborn Volkswagen Scirocco and the forthcoming Hyundai Coupé in a market sector where style and head-turning looks don’t have to come at a huge price. Tipped to cost around £20,000 when it arrives in the UK in Decem­ber 2008, the two-door is certain to sell like hot croissants – so we caught up with it at Renault’s test track in northern France to see what buyers can expect.

Revealed at September’s Frankfurt Motor Show, the Coupé looks every bit as amazing on the road as it did on the stand. It’s part of Renault’s plan to challenge the likes of BMW and Audi, and bosses know that improving reliability and quality alone isn’t enough – the car needs style, too.

To this end, the Coupé is everything its hatch brother isn’t: daring, dynamic and desirable, with shades of the Aston Martin V8 Vantage from the rear. You could park it next to a BMW 3-Series Coupé and plenty of people would prefer the Renault on looks. Stephane Janin, the man in charge of Renault’s concept car des­ign, is pleased with the results.

He told us: “We wanted to produce a car that people would desire and want to buy. The Coupé is a sexy model with a lot of drama that should appeal to a much wider audience.”

At the front, piercing headlights stretch back into the bonnet. They’re accompanied by two slim-line LED foglamps that light up the ground-hugging grille. The side profile is particularly striking, and is distinguished by its steeply raked roofline and shal­low windows, which give the newcomer a racy and athletic stance.

Sadly, the show car’s exotic scissor doors are too costly to put into production, while the glamorous cabin – with its minimalist layout, intricate dials and spade-shaped auto selector – will be replaced by an upmarket version of the standard Laguna design.

In fact, the interior will be a real strength – high on quality and comfort – and our drive showed Renault has got the basics right. The driving position is low, the seats hug you and small glass areas provide a cocooned feel.

Although we weren’t able to put the priceless show car fully to the test, the signs look good, with finished versions set to get the same four-wheel steering as the GT hatch, plus a sporty suspension set-up.

There will also be plenty of engine choices. Driving the front wheels via a six-speed manual or automatic box will be a 168bhp 2.0-litre petrol turbo or a 2.0 dCi turbodiesel. Flagship cars get a powerful new 3.5-litre petrol V6 shared with the Coupé’s Nissan 350Z stablemate or Renault’s fresh 180bhp 3.0 V6 diesel. The latter combines a 0-60mph time of seven seconds with economy of around 45mpg. Add it all up and, if bosses get the price right, they’ll have a winner on their hands.

Rival: Volkswagen Scirocco Reviving one of VW’s most famous badges, the reborn Scirocco takes a new approach with a hatch body and radical styling. It promises a sporty driving experience – thanks to underpinnings shared with the latest Golf GTI – and is the car the Laguna Coupé has to beat.