The newer Twingo improves upon the old model with added luxury, cabin space and refinement 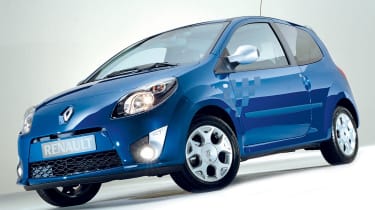 Even though the car never officially went on sale in British showrooms, Renault managed to shift more than two million examples of the original Twingo, and so it knows the all-new model has a really tough act to follow. However, our first impressions show that the company should have little to worry about. Its latest baby retains much of the character of the previous car, but combines it with the kind of luxury, cabin space and refinement that the modern buyer demands.

It's been a long time coming, but the new Twingo is finally here! For the first time in 14 years, Renault's city model will be sold in Britain. Has it been worth the wait? In this exclusive photoshoot, Auto Express looks at the first right-hand-drive car to hit the UK.

And there's no doubt initial impressions are good. Renault is aiming its new baby upmarket - at the likes of the Fiat 500 and MINI. As a result, there's a depth of quality that shines through the compact dimensions.

Although the faired-in nose and large headlamps still give the Twingo a friendly face, the look is surprisingly grown-up - particularly when compared to the previous model. Chunky, angular bodywork is more reminiscent of the Renault Modus than the innova-tive original, but that's not to say the car has sacrificed its individuality. The latest Twingo has lots of character.

At launch, there will be a choice of only two models: the GT and Dynamique. Go for this GT and you get neat touches such as racing checks on the doors and silver finish for the mirrors, spoiler and front foglight surround.

Inside, there's an extremely spacious cabin with easily enough room for four adults. Extra boot space can be freed up by sliding the two individual back seats. With the independent rear chairs pushed fully forwards and the bench folded flat, the 3.6-metre-long Twingo offers 951 litres of stowage space - a hugely impressive figure for such a small car.

Up front, the newcomer is just as practical, with a 13-litre glovebox and generous door bins. There are also extra cubbyholes next to the steering wheel, on top of the dashboard, plus a 3.7-litre bin under the front chairs. Netted pockets on the seatbacks are provided for passengers in the rear.

Ahead of the driver, the central digital speedo and trip computer display dominates your view. As with the MINI, the Twingo has its rev counter mounted on a pod on the steering column. Quality is impressive, with most of the matt-finished plastics soft to the touch. Both models also benefit from the TunePoint audio connection in the glovebox. It enables owners to plug in virtually any music player, from Apple's iPod to a simple USB memory stick.

And the technology doesn't stop there. Buyers will be treated to standard air-conditioning, cruise control, a full-length sunroof and automatic control of wipers and lights.

When the Twingo goes on sale in September, there will be two engine options. The Dynamique is powered by Renault's familiar 75bhp 1.2-litre petrol unit, while the GT has the new 100bhp TCE (Turbo Control Efficiency) version of the same motor. The latter propels the Twingo from 0-62mph in 9.8 seconds, yet returns 47mpg. Both units can be specified with either five-speed manual or semi-auto boxes.

We will have to wait until the summer to see if the newcomer will measure up on the road. But on first acquaintance, the little Renault looks to be a winner. With prices for entry-level cars starting at around £8,000, it won't be cheap, yet the fit, finish and equipment make up for that. So even in a class this full of enticing options, the Twingo is a welcome addition.