Sumptuous two-door promises to be the 'sportiest' Rolls ever. 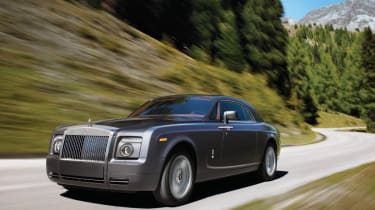 Rolls-Royce has sold more Drophead Coupés than it first anticipated, and the new Coupé is likely to be even more popular. It’s the perfect model for the world’s richest car fans who are looking for something slightly less stately and more driver-focused than the full-sized Phantom.

It’s the car that Britain could never have built – yet the machine that BMW felt it had to... This is the striking Rolls-Royce Phantom Coupé, which is described by its German maker as ‘the greatest driver’s car Rolls-Royce has ever produced’.

It’s a serious departure from the heritage of a firm that provided chauffeur-driven luxury to the rich and famous. Today, the Coupé carries an echo of BMW’s boast as the builder of the Ultimate Driving Machine.

However you interpret the move to create the new Coupé, Rolls-Royce is determined to put drivers behind the wheel like never before.

Still, some things don’t change, and this model remains as reassuringly expensive as ever. It costs £296,500 – although that price can be increased spectacularly with whatever you fancy spending on bespoke trim. Pink leather? Crocodile skin dash? Anything that doesn’t compromise R-R’s quality and reliability can be arranged, insiders say.

You might not want to load your Coupé with too much extra kit, as it already weighs 2,630kg. Yet despite this bulk, the 6,749cc V12 engine offers astounding pace. With 453bhp and 720Nm of torque, the 0-60mph sprint takes 5.5 seconds and top speed is electronically limited to 155mph. There’s even a chrome-plated ‘Sport’ button on the steering wheel that quickens the response of the automatic six-speed transmission and holds each gear for longer, making overtaking supremely easy.

Agility Despite the promise, the Coupé is no sports car, but the wheelbase is 250mm shorter than the Phantom’s. What’s more, stiffer rear dampers, beefier anti-roll bars and improved steering feel convey greater agility, making it by far the most driver-focused Rolls yet.

It’s one of the best looking, too. Derived from the 101EX design study unveiled in 2006 – which also spawned last year’s Phantom Drophead Coupé – the model is sleek, with the roof adding a Fifties retro feel. As with the Drophead, you can order a brushed steel bonnet and windscreen surround.

Rear-hinged doors (with a power-assisted closing mechanism) open for access to a cabin finished to the highest standards; the switchgear in particular is exquisite in appearance, feel and operation. The rakish hard-top brings some compromises in rear seat space, where six-foot passengers will find their heads touching the rooflining. There’s also much less legroom than in the back of the Phantom.

It would be unfair to describe the Coupé as a two-plus-two, and the 395-litre boot will easily take four sets of golf clubs. But this is a car designed around the front occupants – the driver in particular.

From that position, it’s one of the world’s most comfortable long-distance tourers. And if you’re rich enough to fill the 100-litre fuel tank, it gives a range of 400 miles. The Coupé is more relaxing than any train or plane, as it’s near-silent at speed, with barely a whisper of wind noise and a distant tyre rumble.

If it has faults, they are only minor. The plastic cup-holders on the centre console are unworthy of their surroundings, the sat-nav software isn’t exactly state of the art and BMW’s iDrive cabin control system is even less satisfactory here than it is in the products of its parent company.

But let’s not quibble too much. Rolls-Royce is once again a successful marque building ultra-desirable cars – and without BMW, it might not exist at all.

Rival: Continental GT Speed It’s less than half the price of the Phantom Coupé at a ‘mere’ £117,500 and is much less prestigious. But the powerful Bentley is still a handsome car. It rides and handles well for its size, and has a comfortable and beautifully finished interior. The new Speed version costs £133,000, and its 6.0-litre W12 engine is tuned to produce 600bhp – which gives the two-door Continental the ability to hit a 200mph top speed.